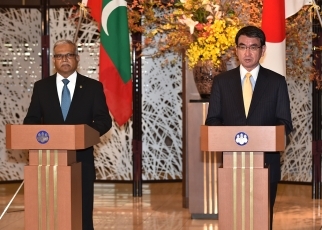 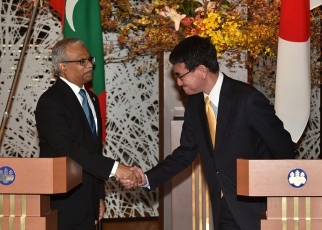 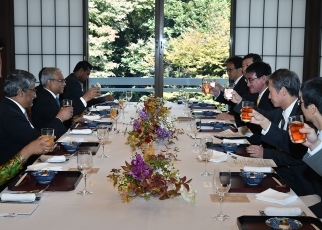 On November 17, from 11:50 a.m. for approximately 60 minutes, Mr. Taro Kono, Minister for Foreign Affairs, held a meeting over lunch with H.E. Dr. Mohamed Asim, Minister of Foreign Affairs of the Republic of Maldives. The overview of the meeting is as follows.

1. Bilateral relations
Minister Kono stated that this year is the 50th anniversary of the establishment of diplomatic relations between Japan and the Maldives, and welcomed Minister Asim’s first visit to Japan. Minister Kono also noted that Minister Asim is visiting Japan as the first Maldivian with a visa issued by the Embassy of Japan in Maldives, and expressed his wish to take this opportunity for the cooperation in the field of climate change and for intensifying bilateral exchanges, including in sports.

In response, Minister Asim expressed gratitude for Japan’s support thus far, and showed his expectation that the bilateral relationships between Japan and the Maldives, marking the 50th anniversary of the establishment of diplomatic relations, will be further enhanced, with more Japanese tourists to visit the Maldives and more investment extended by Japanese companies.

2. Regional and international affairs
Minister Kono explained Japan’s Free and Open Indo-Pacific Strategy, and stated that Japan intends to cooperate in the fields of disaster reduction and maritime securities with the Maldives, situated in strategic position in the Indian Ocean. In response, Minister Asim stated that the Indian Ocean is strategically important, welcomed Japan’s efforts and expressed his wish to cooperate closely with Japan on this matter. Additionally, the two ministers exchanged views on North Korea, and shared the view that it is critical to intensify pressure through efforts such as fulfilling the nited Nations Security Council (UNSC) resolutions.