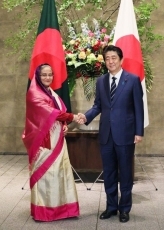 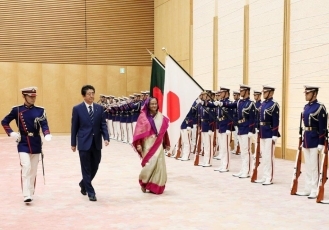 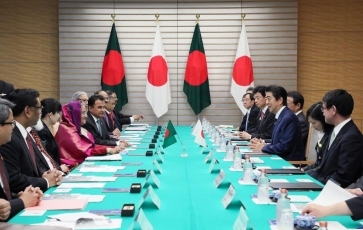 (2) In response, Prime Minister Hasina stated that Japan is a long-standing friend of Bangladesh and that she is delighted to come back to Japan and be reunited with Prime Minister Abe. She offered her congratulations on the beginning of the Reiwa era and expressed deep appreciation for Japan’s contributions to the development of Bangladesh to date.

(1) Prime Minister Abe stated that under the leadership of Prime Minister Hasina Bangladesh has achieved high economic growth, and that the nation’s development is something that will contribute not only to the prosperity of the people of Bangladesh, but to the stability of the Indo-Pacific region as a whole. He also stated that Japan seeks to further advance the Japan-Bangladesh Comprehensive Partnership. Prime Minister Abe also stated that Japan wishes to cooperate towards the realization of a “free and open Indo-Pacific,” and that in the field of maritime security he will continue port visits to Bangladesh by vessels and aircraft of the Japan Self-Defense Forces and further invigorate exchanges between both countries’ Coast Guard authorities. In the economic areas, Prime Minister Abe stated that Japan will continue to provide support Bangladesh to advance towards the achievement of the Sustainable Development Goals (SDGs) and to become a middle income country by 2021. He also expressed the expectation that the Bay of Bengal Industrial Growth Belt (BIG-B) initiative would result in the enhancement of connectivity through high-quality infrastructure and that trade and investment would be further promoted through the entry of Japanese companies. He also requested continuing cooperation to ensure the safety of Japanese nationals and Japanese companies based in Bangladesh.

(2) Prime Minister Hasina welcomed Japan’s participation in initiatives to develop the South Chittagong region and expressed her expectation that more Japanese companies will enter business markets in Bangladesh, through such opportunities as discussions in the Japan-Bangladesh Public Private Joint Economic Dialogue (PPED). Prime Minister Hasina also extended her gratitude for the signing and exchange of notes during her current visit to Japan relating to the provision of yen loans to support such projects as the development of Matarbari Port and the construction of Dhaka MRT Line 1. She also stated that Bangladesh will continue to implement security measures for Japanese nationals and Japanese companies based in Bangladesh.

(3) Both leaders reiterated their commitment that efforts will be made to expand people-to-people exchanges in various fields, including through the utilization of Japan’s new resident status “specified skilled workers” and the milestone 50th anniversary of the establishment of diplomatic relations between Japan and Bangladesh in 2022.

(1) Prime Minister Abe expressed concern about the prolonged issue of displaced persons from Myanmar, and after commenting on the importance of creating an environment conductive in Myanmar with a view to realizing the early repatriation of the displaced persons in a safe, voluntary and dignified manner, he stated that Japan will continue to provide assistance for the efforts of Bangladesh to relieve the burden on host communities. Prime Minister Hasina stressed the need of measures to be taken by the Government of Myanmar to create an environment conducive for return of the displaced persons.

(2) Both leaders reaffirmed that they would work to fully implement all relevant UNSC resolutions towards the denuclearization of North Korea and cooperate to achieve the early resolution of the abduction issue.