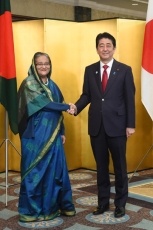 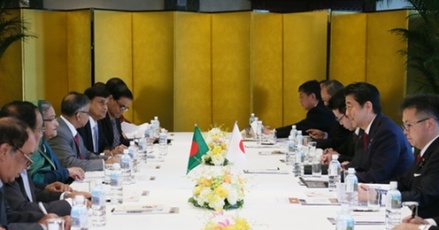 Photo: Cabinet Public Relations Office
1 On May 28, commencing at 10:00 a.m. for approximately 30 minutes, Mr. Shinzo Abe, Prime Minister of Japan, held a Japan-Bangladesh Summit Meeting with H. E. Sheikh Hasina, Prime Minister of the People's Republic of Bangladesh, who is visiting Japan to attend the Outreach Meeting of the G7 Ise-Shima Summit (This is the fifth Summit Meeting between the two leaders). H.E. Mr. Abul Hassan Mahmood Ali, Foreign Minister of Bangladesh, and other officials on the Bangladeshi side, and Mr. Hiroshige Seko, Deputy Chief Cabinet Secretary of Japan, and other officials on the Japanese side also attended the meeting.

Furthermore, Prime Minister Abe stated that Japan will continue to support Bangladesh in realizing its vision of becoming a middle income country by 2021. Prime Minister Abe also expressed his high expectation for the advancement of the Bay of Bengal Industrial Growth Belt (BIG-B) initiative through the 37th ODA Loan Package, which includes support for the Jamuna Railway Bridge Construction Project and the Dhaka Mass Rapid Transit Development Project, as well as for the enhancement of the exchange of people and the further promotion of trade and investment between the two countries.

3 In response, Prime Minister Hasina appreciated for the invitation to attend the G7 Ise-Shima Summit and stated that the Outreach Meeting was a good opportunity to present the developmental challenges faced by Bangladesh as a developing country, to the leaders of leading developed countries. Prime Minister Hasina also expressed her deep gratitude for the steady implementation of assistance provided by Japan for Bangladesh's development, explaining that the development of the Matarbari Ultra Super Critical Coal-Fired Power Plant Project and other infrastructure has been advancing. In addition, Prime Minister Hasina expressed her expectation that the establishment of Japanese Economic Zones and other initiatives will encourage greater investment from Japan, and stated her intention to hold exchanges of views among business people from Bangladesh and Japan in Tokyo, in order to expand investment from Japan.