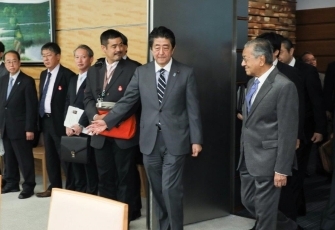 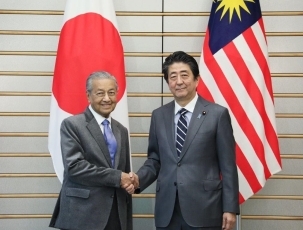 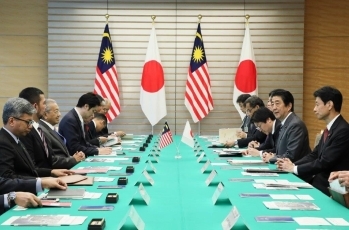 On May 31, commencing at around 10:05 a.m. for approximately 1 hour and 15 minutes, Mr. Shinzo Abe, Prime Minister of Japan, held a summit meeting with Tun Dr. Mahathir bin Mohamad, Prime Minister of Malaysia, who was visiting Japan. The overview of the meeting is as follows. The meeting was attended by Mr. Yasutoshi Nishimura, Deputy Chief Cabinet Secretary, and others.

1. At the beginning, Prime Minister Abe expressed respect towards Prime Minister Mahathir’s commitment to restoring the rule of law, improving transparency and governance, and reducing debt in one year since he took office in May 2018, and announced that Japan will extend its full support to Malaysia. In addition, Prime Minister Abe stated that the Look East Policy advocated by Prime Minister Mahathir 38 years ago has been a beacon for strengthening the friendship between the people of Japan and Malaysia and their bilateral relationship over many years, and that Japan is determined to further advance the multilayered cooperative relations, founded by the Look East Policy.

In response, Prime Minister Mahathir expressed his pleasure to meet Prime Minister Abe again, and stated that while it is important to visit Japan to promote Japan-Malaysia cooperation, he also enjoys visiting Japan to see his friends.

2. The two leaders then welcomed the successful issuance of the 200 billion yen Samurai Bond by the Government of Malaysia in March 2019. The leaders also welcomed that the University of Tsukuba has interest in the idea to establish a branch campus of a Japanese university in Malaysia, as was requested by Prime Minister Mahathir at the Japan-Malaysia Summit Meeting in June 2018. Both Prime Ministers confirmed that the two countries will continue to work together on this initiative. Prime Minister Abe described the progress made in the comprehensive research for transport improvement in Malaysia that is currently underway in the country. In response, Prime Minister Mahathir expressed gratitude for Japan’s assistance and expressed expectations for further cooperation in a range of areas. The leaders also discussed other matters, such as defense cooperation, human resources development including vocational education and training, and healthcare cooperation under Japan’s Asia Health and Wellbeing Initiative.P>

3. The leaders exchanged views regarding the regional situation, including North Korea and South China Sea issues, and other issues faced by the international community such as the free trade system. Prime Minister Abe also requested Prime Minister Mahathir’s understanding and cooperation towards the early resolution of the abductions issue.

4. Based on the achievements of this meeting, the leaders released a factsheet entitled, “Japan-Malaysia Cooperation: Look East Policy Revisited in the New Era.”(English (PDF)