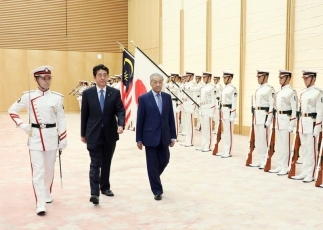 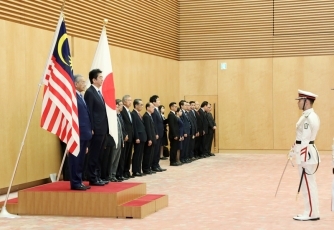 On June 12, commencing at around 10:25 a.m. for approximately 70 minutes, Mr. Shinzo Abe, Prime Minister of Japan, held a summit meeting with Tun Dr. Mahathir bin Mohamad, Prime Minister of Malaysia, who was on a visit to Japan. The overview of the meeting is as follows. The meeting was attended by Mr. Yasutoshi Nishimura, Deputy Chief Cabinet Secretary and others.

2. Prime Minister Abe stated that he hopes to discuss measures to revitalizethe “Look East Policy”, and along with utilizing Japan’s science and technology and work ethic, he hopes to harness the vitality of the Malaysian people to develop Japan and the region and build a cooperative relationship that is mutually beneficial. Prime Minster Abe noted that the President of Hitachi, Ltd.’s Malaysia branch and the founder of Silverlake previously studied in Japan, and expressed the view that individuals such as these have become the driving force for Malaysia’s development. Prime Minister Abe explained that through enhancing Japanese language education, accepting exchange students and trainees and other means, he intends to promote the development of human resources who will flourish on all fronts in the future as well, and will launch an initiative for inviting high-school students to Japan for the purpose of youth exchanges. In response, Prime Minister Mahathir explained that at the time the “Look East Policy” was launched, he focused on Japan’s cultural dimension when considering what sort of country he wanted to develop Malaysia into, and attempted to learn from Japan’s work culture in particular. Prime Minister Mahathir stated that he hopes to strengthen the “Look East Policy” once again.

3. In addition, Prime Minister Abe explained that Japan is Malaysia’s biggest investor country, and mentioned that 1,400 Japanese companies operate businesses in Malaysia that provide jobs for 340,000 people. Prime Minister Abe stated that he also hopes to strengthen defense cooperation and cooperation in the field of maritime security, and intends to build up concrete cooperation with the Association of Southeast Asian Nations (ASEAN) countries, including Malaysia, in order to contribute to realizing a free and open Indo-Pacific

that is based on the rule of law. Prime Minister Mahathir replied that confrontation and tension are not desirable, and ensuring freedom of navigation is important.

4. Furthermore, the two leaders also discussed regional affairs, beginning with North Korea, including the fact that it will be important to extract concrete action from North Korea towards comprehensively resolving outstanding issues of concern such as the abduction issue and the nuclear and missile programs.