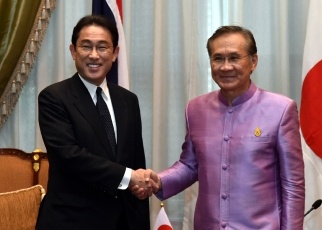 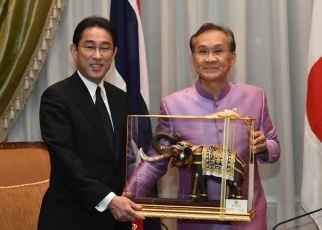 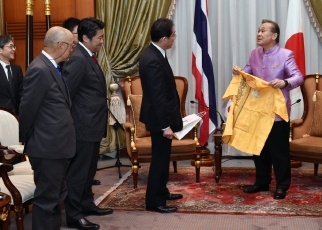 On Sunday, May 1, Mr. Fumio Kishida, Minister for Foreign Affairs of Japan, held a meeting and dinner with H.E. Mr. Don Pramudwinai, Minister of Foreign Affairs of the Kingdom of Thailand for approximately 1 hour and 15 minutes, and 1 hour and 30 minutes, respectively during his visit to Thailand. The overview of the meeting and dinner is as follows. 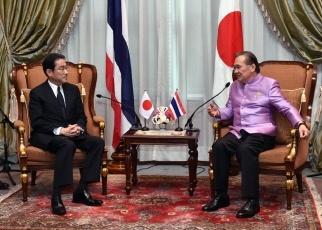 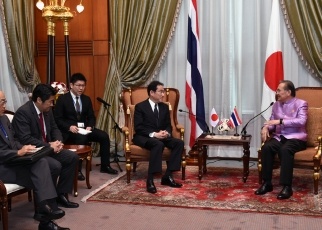 Minister Don welcomed Minister Kishida’s first visit to Thailand, despite his busy schedule, upon the invitation extended by Minister Don at the Japan-Thailand Foreign Ministers’ Meeting held at the APEC Ministerial Meeting in November 2015.

In response, Minister Kishida expressed his pleasure at his first visit to Thailand since being appointed as Foreign Minister, upon the invitation of Minister Don, and stated that he hopes to further strengthen Japan’s Strategic Partnership with Thailand, a country that plays a key role in regional development and enhancing regional connectivity.

Additionally, Minister Kishida expressed his appreciation for the sympathies expressed by Thailand and the assistance it has offered in relation to the Kumamoto Earthquake. Minister Kishida also offered his prayers for the recovery of Their Majesties the King and Queen of Thailand.

In response, Minister Don expressed appreciation for the prayers offered by Minister Kishida for Their Majesties the King and Queen of Thailand. In addition, Minister Don extended his condolences regarding the damage caused by the Kumamoto Earthquake and stated that the Thai Government is ready to provide any assistance it can if it receives a request from the Japanese Government. Furthermore, regarding high level visits between the two countries, Minister Don stated that he wishes to hold a meeting next year to commemorate the 10th anniversary of the conclusion of the Japan-Thailand Economic Partnership Agreement (JTEPA), and requested that Minister Kishida visit Thailand and attend the meeting as the co-chair. Minister Don also stated that H.E. Mr. Prayuth Chan-o-cha, the Prime Minister of the Kingdom of Thailand, wishes to invite Mr. Shinzo Abe, the Prime Minister of Japan, to visit Thailand, and requested Minister Kishida’s support in arranging a visit, for example on the occasion of the Asia Cooperation Dialogue Summit scheduled in October 2016.

Additionally, Minister Kishida explained that he hopes to continue to work closely with Minister Don in relation to the 130th anniversary of Japan-Thailand diplomatic relations next year.

, which the two countries decided to formulate at the Foreign Ministers’ Meeting held in July 2015.

Minister Kishida explained that Thailand’s sustainable development is important for Japan as well, and that Japan intends to continue providing detailed cooperation. He also expressed his hope that Thailand will listen to the views of Japanese companies, and maintain and promote a favorable investment environment, in order to facilitate even greater investment in Thailand. In addition, Minister Kishida requested Thailand’s cooperation in ensuring the safety of the great number of Japanese people in Thailand.

Furthermore, Minister Kishida welcomed efforts by Thailand to deepen collaboration with neighboring countries, as a means of strengthening integration in the Mekong region, and expressed support for Thailand’s initiatives.

In response, regarding improvements to the investment environment and ensuring the safety of Japanese people in Thailand, Minister Don noted that numerous Japanese private-sector companies have invested in Thailand and that the great number of Japanese people in Thailand are contributing to bilateral relations. Furthermore, Minister Don expressed Thailand’s intention to devote its fullest efforts to ensuring the safety of Japanese people, and the Thai Government’s desire to cooperate with Japan in all areas, not only the economy and investment, but also in a broad range of fields including agriculture, medicine, and the investment environment, among others.

Minister Kishida stated that he is aware of the national referendum on the new draft constitution planned for August, and said that he hopes that Thailand will make swift progress towards the restoration of a civilian government while listening to the people.

In response, in regard to conditions in Thailand, Minister Don explained that the process for the restoration of a civilian government is steadily advancing in line with the roadmap. Furthermore, Minister Don expressed his strong belief in the national referendum on the draft constitution scheduled for August 7, 2016 and the holding of a general election in the middle of next year, and explained that the city is peaceful, as Minister Kishida observed during his visit.

3. Cooperation in Regional and International Fora

, that the G7 Foreign Ministers came into direct contact with the realities of atomic bombings, and that these developments increased momentum for the realization of a world free of nuclear weapons. In addition, Minister Kishida expressed his wish to strengthen cooperation with Thailand and his hope for the early ratification of the Comprehensive Nuclear Test Ban Treaty (CTBT) by Thailand.

Minister Don expressed his appreciation for the explanation by Minister Kishida regarding the G7 Hiroshima Foreign Ministers’ Meeting and praised the meeting as being very meaningful. Furthermore, Minister Don believed that the meeting was beneficial in terms of demonstrating the sense of crisis among developed countries regarding nuclear disarmament and non-proliferation, and raising the interest of the international community. Moreover, Minister Don explained that Thailand holds the G77 Presidency and intends to provide any necessary input in preparation for the G7 Ise-Shima Summit.

Minister Kishida stated that unilateral attempts to change the status quo in the South China Sea, including large-scale and rapid land reclamation, and the building of outposts, are a shared concern for the international community.

In response, Minister Don said that he is aware of the issuance of a results document regarding maritime security at the G7 Hiroshima Foreign Ministers’ Meeting and that the G7 nations are devoting efforts to maritime security (PDF)

. Minister Don also explained initiatives taken by Thailand in relation to the South China Sea, when it was the ASEAN-China country coordinator, and Thailand’s view that it is important to resolve disputes through diplomatic solutions and in accordance with laws, and to deliver a unified ASEAN response.

Minister Kishida explained that North Korea conducted a nuclear test and ballistic missile launches in 2016, and poses a grave threat to the peace and security of the region and the international community. Minister Kishida stated that these actions are totally unacceptable and it is necessary to increase pressure on North Korea, through the strict implementation of the United Nations Security Council resolutions and other measures. Furthermore, Minister Kishida communicated Japan’s desire to work together with Thailand to achieve a comprehensive solution to issues involving North Korea, including the nuclear, missiles, and abduction issues.

In response, Minister Don affirmed the need to strictly implement the United Nations Security Council resolutions related to North Korea, and stated that Thailand is working to ensure their full implementation.

Minister Kishida explained that Japan places importance on United Nations Security Council reform and hopes to achieve progress in a detailed format during the good opportunity presented by the United Nations 70th General Assembly meeting. Minister Kishida also expressed gratitude for Thailand’s offer to host the next ministerial meeting of the Conference on the Cooperation among East Asian countries for Palestinian Development (CEAPAD).

In response, Minister Don explained that Thailand is ready to assume a larger role in the international community, and that it intends to continue to collaborate closely with Japan for CEAPAD and reforms at the United Nations.