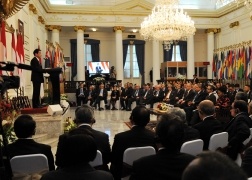 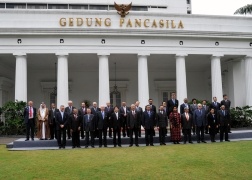 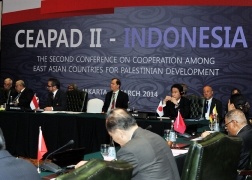 On March 1, the second ministerial meeting of the Conference on Cooperation among East Asian Countries for Palestinian Development (CEAPAD) was held in Jakarta, Indonesia. The meeting, hosted by Indonesia was co-chaired by Mr. Fumio Kishida, Minister for Foreign Affairs of Japan, Dr. Marty Natalegawa, Minister of Foreign Affairs of the Republic of Indonesia, and Dr. Rami Hamdallah, Palestinian Prime Minister. An outline of the meeting follows, along with its evaluation:

(1) Time and date: March 1 (Saturday) from 10 a.m. to 3 p.m.
(In parallel with the meeting, the Palestinian Business Forum was held under the sponsorship of the Indonesian government on March 1-2.)

(2) Venue: The Indonesian Ministry of Foreign Affairs and Borobudur Hotel (in Jakarta)

(3) Participants: Representatives of 22 countries and regions, and five international organizations (including 12 ministerial-level participants). South Africa took part as a guest.

(1) In an opening ceremony, Indonesian Foreign Minister Marty explained the country's Palestinian aid and praised the role of CEAPAD. Minister Kishida stressed the significance of CEAPAD and announced Japan's new assistance to the Palestinians. After remarks by Maite Nkoana-Mashabane, Minister of International Relations and Cooperation of the Republic of South Africa (a guest nation), Palestinian Prime Minister Hamdallah expressed his gratitude to CEAPAD and Asian countries for their assistance. Dr. H. Susilo Bambang Yudhoyono, President of Indonesia, declared the opening of the meeting, while underscoring the importance of Palestinian aid and expressing his thoughts on how stability should be restored to the Middle East.

(2) At the meeting, many representatives of the participating countries and organizations made the following remarks and expressed their intention to provide the Palestinians with assistance on the basis of their respective strengths:

(3) A luncheon hosted by Indonesian Foreign Minister Marty, and then a signing ceremony was held for the IDB, the Japan International Cooperation Agency (JICA) and Palestine on the establishment of an assistance cooperation mechanism called CEAPAD Facilitation Mechanism. It was followed by a joint press announcement by Japan, Indonesia, Palestine and South Africa, where a joint statement adopted at the meeting was distributed.

(4) In parallel with the ministerial meeting, the Palestinian Business Forum under the sponsorship of the Indonesian government and an exhibition of Palestinian products were held. At the forum, Dr. Jawad Naji, Minister of National Economy of the Palestinian Authority, briefed the audience on the Palestinian business environment and attended a question-and-answer session with business leaders from a number of countries.

Minister Kishida announced new assistance to the Palestinians as follows:

(2) Japan will support the training of about 1,000 Palestinians over five years, including trilateral cooperation programs for the Palestinians involving CEAPAD participating countries. Specifically, Japan will work with Indonesia in agriculture, with Malaysia in finance, agriculture and planning, with Thailand in tourism, and with Singapore in disaster response and the environment (the Japan-Singapore Partnership Program for the 21st Century or JSPP21).

(3) CEAFAM, a mechanism that makes use of a fund to be established by the IDB will be launched, through cooperation with JICA, in order to promote support measures for human resources development taken by countries participating in CEAPAD.

(4) Japan will provide about 6.2 million US dollars in infrastructure aid and send experts to accelerate work to start production in the Jericho Agricultural Industrial Park (JAIP).

(1) Minister Kishida took part as co-chair in CEAPAD, a unique initiative of Japan aimed at achieving Middle East peace, and expressed Japan's determination to continue to play a leading role in promoting assistance for Palestinians by bringing together the strengths of Asian countries.

(2) Representatives of participating countries and organizations reaffirmed their intention to work closely together to push ahead with the CEAPAD process.

(3) Welcoming new members (China, the Philippines, Cambodia and Laos) CEAPAD produced a significant result in that it welcomed adopted a joint statement spelling out new assistance programs. The Palestinian aid through CEAPAD is expected to support the ongoing peace talks.