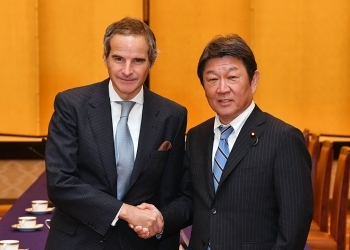 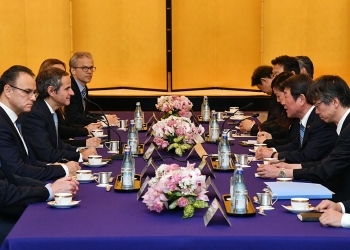 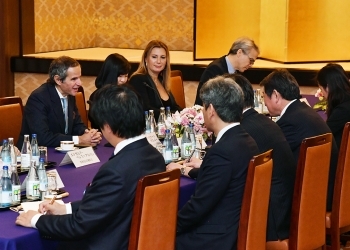 On February 25, commencing at around 7:00 p.m. for approximately 2 hours, Mr. Motegi Toshimitsu, Minister for Foreign Affairs of Japan held a meeting and working dinner with H.E. Mr. Rafael Mariano Grossi, Director General of the International Atomic Energy Agency (IAEA). The overview of the meeting is as follows.

2. Minister Motegi expressed his gratitude for the cooperation of the IAEA in decommissioning the TEPCO’s Fukushima Daiichi Nuclear Power Station and the handling of the ALPS treated water. In response, Director General Grossi stated that the IAEA highly values Japan’s efforts to proceed with the reconstruction of Fukushima and decommission of the nuclear power station in a compatible manner, and the IAEA would continue to cooperate with Japan. With regard to the ALPS treated water(Note), Director General Grossi stated that the IAEA is currently examining the contents of the report of the Subcommittee on Handling of the ALPS Treated Water and the IAEA would like to play a constructive role. He added that the IAEA would like to cooperate with the Government of Japan to resolve the issue while ensuring openness and transparency. Both sides agreed that they would closely coordinate with each other.

3. Both sides exchanged views on ways to strengthen Japan-IAEA cooperation, and Minister Motegi stated that Japan would cooperate in strengthening the foundation of the IAEA safeguards and efforts in such areas peaceful uses of nuclear energy. In response, Director General Grossi the IAEA safeguards is the heart of the IAEA’s activities and expressed his appreciation for Japan's cooperation . Both sides shared the view that they would work together to build a more cooperative relationship.

4. Both sides also exchanged views on the situation surrounding nuclear issues of North Korea and Iran and confirmed that they would continue close cooperation with each other.