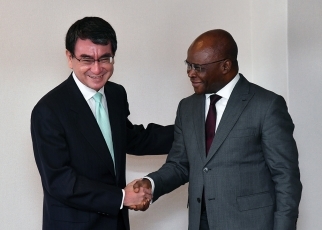 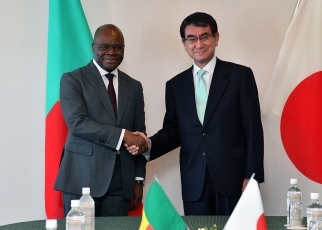 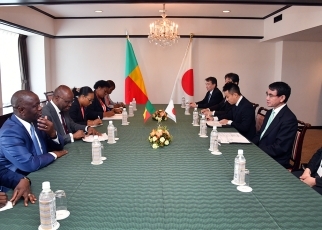 On October 7, commencing at 10:05 a.m. for approximately 25 minutes, Mr. Taro Kono, Minister for Foreign Affairs, held a Foreign Ministers’ Meeting with H. E. Mr. Aurélien Agbenonci, Minister of Foreign Affairs and Cooperation of the Republic of Benin, who is visiting Japan for the Tokyo International Conference on African Development (TICAD) Ministerial Meeting. The overview of the meeting is as follows.

1. At the outset, Minister Kono wholeheartedly welcomed Minister Agbenonci’s visit to Japan following his visit in June this year, and stated that he would like to cooperate toward TICAD7 next year. In response, Minister Agbenonci stated that H.E. Mr. Patrice Athanase Guillaume Talon, President of the Republic of Benin, was considering participation in TICAD7, and promised cooperation toward the success of the MeetingTICAD7.

2. Following that, Minister Agbenonci expressed gratitude for Japan’s support for Benin, including the construction and maintenance of a Hospital Allada in Atlantique Region of Benin, water supply projects in the cities of Glazoue and Dassa-Zoume, and food assistance to contribute to raising school attendance rate by using school meals. In addition, he stated that he was absolutely delighted at the progress of preparations toward intersection improvement in Cotonou City.

3. Furthermore, Minister Kono stated that Japan recognized Benin as an important partner for the Corridor Development for “The West Africa Growth Ring” supported by Japan, and expressed his hope to continue to strengthen Japan-Benin relations. Both Ministers also held an exchange of views regarding cooperation in the international arena, including the International Whaling Commission (IWC).