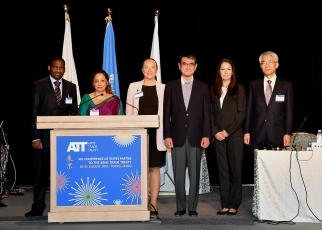 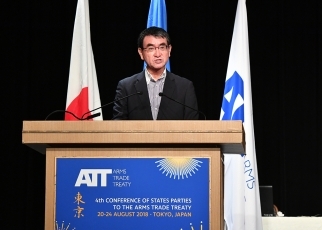 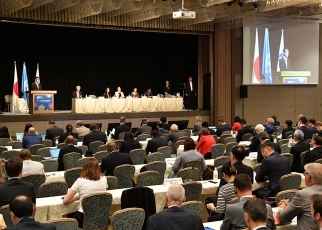 1. From 20th to 24th August, the 4th Conference of States Parties (CSP4) to the Arms Trade Treaty (ATT) was held in Tokyo. There were more than 400 participants from States Parties, Signatories, Observer States, regional and international organizations, as well as civil society.

2. This is the first time that the Conference of States Parites to the ATT was held in the Asia-Pacific region, and Mr. Nobushige Takamizawa, Ambassador of Japan to the Conference on Disarmament, precided over the Conference as President of CSP4. Active discussions were held on such issues as effective implementation, and universalization of the Treaty, promoting transparency, as well as strengthening the capacity of the Secretariat of the Treaty and enhancing international cooperation.

3. On the first day of the Conference, Mr. Taro Kono, Minister of Foreign Affairs, attended the opening session and made a statement (English (PDF)

) on behalf of the Government of Japan. In his remarks, Minister Kono emphasized that the ATT, which aims to promote regional and international peace and security through appropriate management of international trade on conventional weapons, including small arms and light weapons, and the prevention of unregulated or illicit trade, is currently facing two imminent challenges, namely, further universalization and effective implementation of the Treaty. Minister Kono called on all States Parties, Signatories, Observer States, civil society, NGOs, industry and other various stakeholders to work together to promote the substantial value and advantages of the ATT.

4. On the final day of the meeting, the Conference adopted the Final Report. This includs incorporating suggestions by Japan from its working papers, such as measures to prevent the illicit transfer of arms and enhance systematic information exchange. These working papers were submitted to the working groups, namely, "Working Group on Effective Treaty Implementation", "Working Group on Transparency and Reporting" and "Working Group on Universalization of the Treaty", which were established as a standing basis by CSP3 in 2017. The Conference decided to continue discussion on these issues based on the achievement of its activities over the past year. The Conference decided to hold the Fifth Conference of States Parties (CSP5) to the Arms Trade Treaty (ATT) from 26 August to 30 August 2019 in Geneva, and also elected His Excellency Jānis KĀRKLIŅŠ, Ambassador and the Permanent Representative of Latvia to the United Nations Office in Geneva, as President of CSP5.

［Reference］Outline of the Arms Trade Treaty
Resolution of the ATT was adopted in the United Nations General Assembly on the 2nd April, 2013 and the Treaty entered entered into force on 24th December, 2014. Japan signed the Treaty on 3rd June 2013 on the first day it opened for formal signature, and deposited its ratification to become a State Party on the 9th May 2013. At the opening of CSP4, the total number of States Parties was 97.