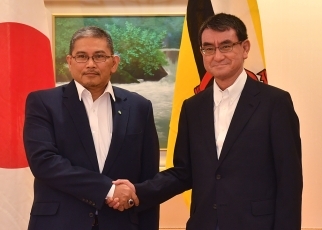 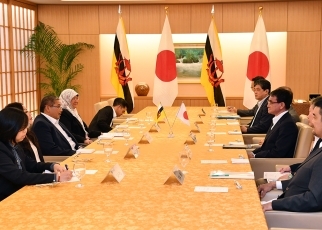 On July 2, for about 50 minutes starting from 11:05 a.m., Mr. Taro Kono, Minister for Foreign Affairs of Japan, held a Foreign Ministers’ meeting over a lunch with Dato Erywan Pehin Yusof, Minister of Foreign Affairs and Trade II of Brunei Darussalam, who was in Japan to attend the RCEP Intersessional Ministerial Meeting. The overview of the meeting is as follows.

1. At the outset of the meeting, Mr. Kono expressed his gratitude to Dato Erywan for his hospitality rendered during Mr. Kono’s visit to Brunei in February this year. Mr. Kono went on to say that the meeting at that time was an occasion to show strongly the importance of Japan-Brunei relationship. He also stated that the meeting on July 2 was the 4th Foreign Ministers’meeting with Brunei since his appointment as the Minister for Foreign Affairs last summer and expressed his hope to maintain high-level exchanges between the two countries. Dato Erywan responded by expressing his appreciation for Mr. Kono’s visit to Brunei this February and his hope to envigorate the good bilateral relationship through exchanges of views with Mr. Kono on various occasions.

2. Both ministers affirmed that Japan and Brunei would continue cooperation in areas such as Brunei’s economic diversification. In addition, Mr. Kono maintained that he intended to enhance collaboration with Brunei, which is ASEAN’s country coordinator for Japan, in dealing with regional challenges under the banner of “Free and Open Indo-Pacific Strategy

3. Both ministers also exchanged views on regional situations such as North Korea and the South China Sea. With regard to North Korea, both ministers concurred with the need for inducing tangible actions by North Korea in accordance with the result of the US-North Korea summit meeting. Mr. Kono also stressed the importance of a holistic solution to the abduction, nuclear and missile issues.