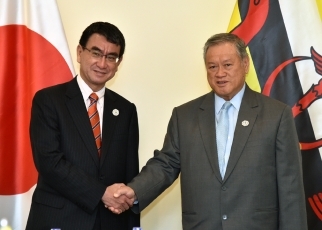 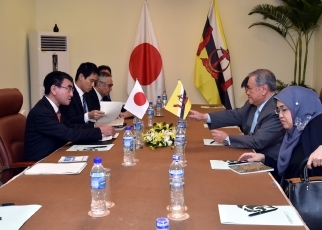 Minister Kono welcomed the recent increase in high-level bilateral visits, expressed congratulations on the 50th anniversary of the accession to the throne of His Majesty Sultan Haji Hassanal Bolkiah of Brunei this year, and explained that he intends to further strengthen bilateral relations. Additionally, Minister Kono stated that he hopes to cooperate on Brunei’s economic diversification, and, based on the cooperative relationship that Japan has been building thus far with Brunei, which serves as the coordinating country for the Association of Southeast Asian Nations (ASEAN) with Japan, he intends to cooperate further toward the success of ASEAN-related Summit Meetings.

In response, Minister Lim stated that he is very happy that Their Majesties the Emperor and Empress of Japan signed a congratulatory book on the occasion of the 50th anniversary of the accession to the throne of His Majesty Sultan Haji Hassanal Bolkiah. Minister Lim explained that he intends to further strengthen the bilateral relationship with Japan, including through cooperating to diversify Brunei’s economy.