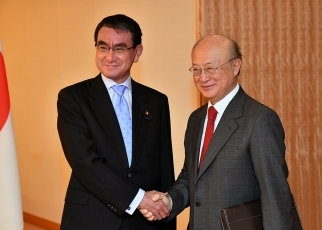 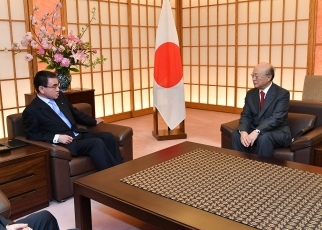 On April 9, commencing at around 6:00 p.m. for approximately 20 minutes, Mr. Taro Kono, Minister for Foreign Affairs, held a meeting at the Ministry of Foreign Affairs with Mr. Yukiya Amano, Director General of the International Atomic Energy Agency (IAEA). The outline of the meeting is as follows.

2. Minister Kono stated as follows; it is important to establish the stringent verification system by the IAEA for realizing complete, verifiable, and irreversible denuclearization of North Korea while North Korea allegedly shows its intention toward denuclearization; it is essential to make the most of the IAEA’s expertise and experience.

3. DG Amano explained about discussions with other countries and the measures of establishing the stringent verification system toward denuclearization of North Korea in light of the past experience of the IAEA.

4. Minister Kono agreed to continue close cooperation with the IAEA under DG Amano.

[Reference] (International Atomic Energy Agency (IAEA))
(1) The IAEA is an international organization established in 1957 for the purposes of promoting the peaceful uses of nuclear energy and preventing the diversion of nuclear energy for military purposes based on the Statute of the IAEA. (It currently has 169 Member States.)