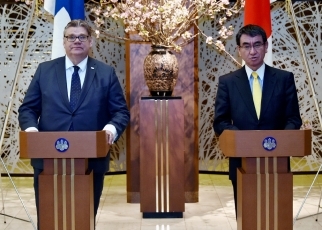 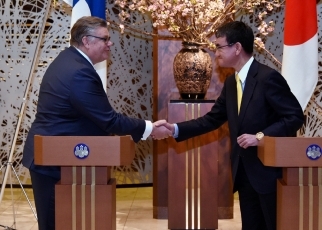 (1) Minister Kono welcomed progress of bilateral cooperation in a broad range of fields, including the area of security and defense, exchanges between companies and social security based on the “Strategic Partnership” (PDF)

that the two countries’ leaders had announced in 2016. He also stated that he would like to coordinate closely on Arctic policy with Finland, Chair of the Arctic Council.

(2) Minister Soini stated that he would like to strengthen the bilateral relations in broad areas, including Arctic policy.

(3) The two ministers welcomed that Japan and Finland would co-host the World Circular Economy Forum 2018 in Yokohama in October this year.

3. Japan-European Union (EU) relations
The two ministers affirmed that they would cooperate toward early signing and entry into force of the Japan-EU Economic Partnership Agreement (EPA).

(1) With regard to North Korea, the two ministers shared the view that they never accept nuclear-armed North Korea, and that they would coordinate closely, including on the full implementation of the latest United Nations Security Council (UNSC) resolutions.

(2) In addition, the two ministers exchanged views on Russia and Ukraine.