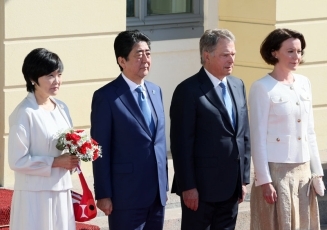 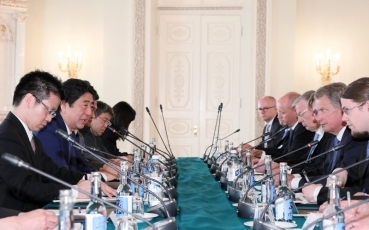 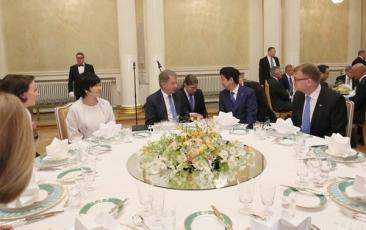 On July 10 for approximately 50 minutes starting from 10:15 a.m. local time, Prime Minister Abe, during his visit to Finland, held the Japan-Finland Summit Meeting with President Sauli Niinistö. The overview is as follows.

(2) The two leaders agreed to further develop the strategic relations of the two countries and to strengthen their cooperation toward the 100th anniversary of diplomatic relations in 2019 in such fields as economy, defense, environment and health.

(4) The two leaders also confirmed their cooperation in the area of empowerment of women.

(2) Regarding the withdrawal of the UK from the EU, Prime Minister Abe stated that he was paying close attention to the UK’s negotiations to exit the EU, and requested consideration to be given to minimizing impact on companies by the exit.

(3) Regarding the Japan-EU Economic Partnership Agreement (EPA), Prime Minister Abe stated that in the context of recent tendency of protectionism, the achievement of the agreement in principle on the EPA and the Strategic Partnership Agreement (SPA) demonstrated the strong political will of Japan and the EU to continue to raise the banner of free trade high, which was a powerful message to the world. Prime Minister Abe asked for continued cooperation toward the early conclusion of these agreements.

(4) In response, President Niinistö agreed with the maintenance of an international community based on rules and stated that the agreement in principle of the Japan-EU EPA was important from this perspective and that he would like to promote a strong Europe.

(5) Moreover, Prime Minister Abe called for cooperation for the removal of the EU import restrictions on Japanese products such as foods including those made in Fukushima Prefecture. President Niinistö stated that he would like to properly consult with the EU on this point.

Regarding Arctic policy, Prime Minister Abe welcomed Finland’s accession to the chairmanship of the Arctic Council, and stated that Japan would contribute even more actively to the activities of the Arctic Council under the leadership of Finland. Furthermore, the two leaders agreed to promote cooperation is such areas as environmental protection of the Arctic.

(1) Regarding the situations in the East China Sea and the South China Sea, the two leaders agreed to continue to cooperate closely in order to maintain the international order based on the rule of law.

(2) Regarding North Korea, the two leaders confirmed that, taking into consideration the ballistic missile launch on July 4, what would be needed now was not dialogue but stronger pressure on North Korea, and that the role of China was important. Furthermore, Prime Minister Abe asked for understanding and cooperation toward the early resolution of the abductions issue, and obtained the understanding of President Niinistö.

(3) Regarding Russia, Prime Minister Abe explained the recent Japan-Russia relations including the Japan-Russia Summit Meeting on July 7. The two leaders confirmed that they would cooperate in advancing policies toward Russia.