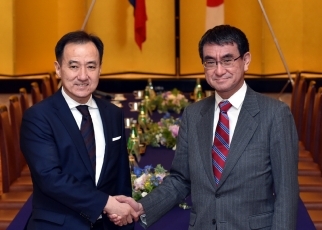 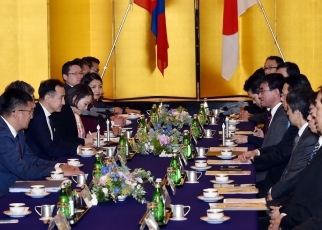 1. Bilateral Relationship
At the outset, Minister Kono welcomed Minister Tsogtbaatar on his first visit to Japan since his appointment in October 2017, and expressed his desire to promote sports exchanges between Japan and Mongolia towards the 2020 Tokyo Olympic and Paralympic Games with Minister Tsogtbaatar, who is a judo enthusiast. In response, Minister Tsogtbaatar stated that Japan is a strategic partner that shares the universal values of democracy, human rights, and freedom and that the deepening of cooperation with Japan is a matter of the highest priority for Mongolia.

The two Ministers also agreed to continue efforts on both sides for the development of a truly mutually beneficial “Strategic Partnership” under the Japan-Mongolia Mid-term Action Plan for a Strategic Partnership (2017-2021) established in March 2017.

Minister Kono conveyed his hope that Mongolia’s fiscal discipline would be steadfastly secured, referring to the fiscal support under the International Monetary Fund (IMF) support program, and sought cooperation towards the earliest possible opening of the New Ulaanbaatar International Airport for use. In response, Minister Tsogtbaatar expressed gratitude for the assistance from Japan and stated that Mongolia would make further efforts to stabilize its economy.

The two Ministers also confirmed that they would work towards strengthening the bilateral economic relationship, including the improvement of the investment environment in Mongolia through the steady implementation of the Japan-Mongolia Economic Partnership Agreement (EPA).

2. North Korea
With regard to the nuclear and missile issues of North Korea, Minister Kono stated that it was important to place maximum pressure on North Korea through all means available, including the complete implementation of the United Nations Security Council resolutions. The two Ministers agreed to continue to cooperate closely regarding the response to the North Korea issues. In addition, Minister Kono sought the ongoing cooperation of Mongolia towards the early resolution of the abductions issue, and in response Minister Tsogtbaatar expressed his desire to continue to cooperate.