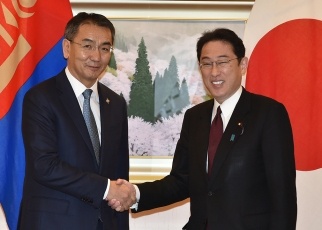 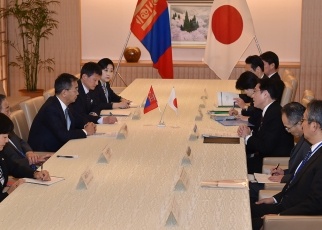 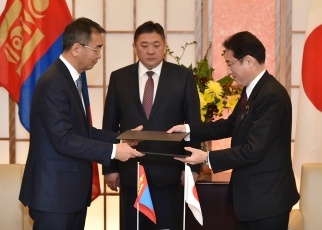 ) that will serve as a roadmap for Japan-Mongolia relations for the next five years. The two Foreign Ministers agreed that the steady implementation of this plan will develop into a truly mutually beneficial and strategic component of bilateral relations. In addition, with regard to financial assistance, Foreign Minister Kishida praised the structural reform program agreed to between Mongolia and the International Monetary Fund and conveyed Japan's readiness to provide as much assistance as possible under the international assistance package.

(2) State of Affairs in North Korea
Foreign Minister Kishida stated that North Korea's nuclear weapons and missile development has reached a new threat level and that Japan would like to cooperate with Mongolia in order to ensure the effectiveness of United Nations Security Council resolutions. The two Foreign Ministers confirmed that Japan and Mongolia will be partners working toward the resolution of issues concerning nuclear weapons and missiles. In addition, Foreign Minister Kishida asked for Mongolia's understanding and support toward the resolution of the abductions issue, and the two Foreign Ministers reaffirmed bilateral cooperation.

(1) Commencing at 11:00 a.m. for approximately 10 minutes, a signing ceremony for the "Japan-Mongolia Mid-term Action Plan for a Strategic Partnership" was held. Foreign Minister Kishida and Foreign Minister Munkh-Orgil signed the Action Plan in the presence of Chairman Enkhbold.

(2) The new Mid-term Action Plan covers a wide range of areas such as politics and security, economy, cultural and people-to-people exchanges, as well as development of human resources. The plan also specifically refers to cooperation between Japan and Mongolia that the two countries will implement until the end of 2021. By initiating cooperation in the international arena and proactively building up mutual cooperation between each other, Japan and Mongolia aim to construct a more mutually beneficial "strategic partnership" in bilateral relations.