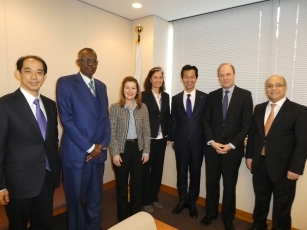 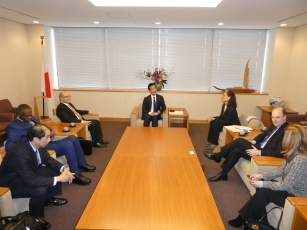 On February 19, commencing at 14:10 for approximately 20 minutes, Mr. Mitsunari Okamoto, Parliamentary Vice-Minister for Foreign Affairs, received a courtesy call from five Governors (the Kingdom of Denmark, the Hashemite Kingdom of Jordan, the Kingdom of Belgium, the Republic of the Sudan and the Republic of Serbia) of the International Atomic Energy Agency (IAEA) currently visiting Japan. The overview of the meeting is as follows:

1. At the beginning, Parliamentary Vice-Minister Mitsunari Okamoto welcomed the Governors to Japan and expressed his hope that they would deepen their understanding of Japan’s efforts for peaceful uses of nuclear energy as well as the efforts following the Fukushima Daiichi Nuclear Power Plant Accident.

2. Parliamentary Vice-Minister Okamoto expressed gratitude to the Governors for their support to the re-appointment of Director General Yukiya Amano. He added that Japan will continue to provide strong support to the efforts of IAEA under the leadership of Director General Amano on North Korea’s nuclear issue, implementation of the Joint Comprehensive Plan of Action (JCPOA) and “Atoms for Peace and Development.” He asked for cooperation on the lifting of the import restrictions and dispelling reputational damages on food from Japan caused by the Fukushima Daiichi Nuclear Power Plant Accident.

3. In response, the IAEA Governors expressed their gratitude for the invitation to Japan. They stated that Japan is making important contributions to IAEA activities, and expressed their hope to strengthen the collaboration with Japan at the IAEA and to deepen their understanding of Japan’s efforts for peaceful uses of nuclear energy and nuclear safety.