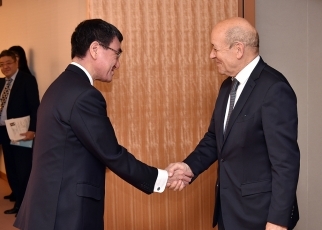 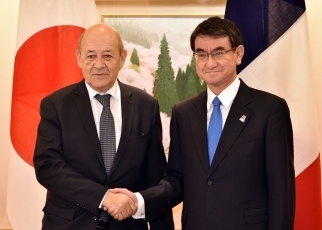 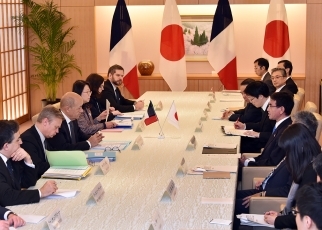 Minister Kono mentioned that Japan and France were “exceptional partners” that shared fundamental values such as freedom, democracy, human rights and the rule of law, and stated that he hoped Japan and France would work together more closely in addressing the North Korea issues as well as various global challenges. The two ministers confirmed that they would further deepen the “exceptional partnership” between Japan and France through “Japonism 2018” and mutual visits by the leaders of the two countries this year, which marks the 160th anniversary of Japan-France diplomatic relations.

(1) The two ministers confirmed that in this commemorative year they would cooperate closely in new economic fields such as innovation, adding to the exsisting cooperative relations including investment.

(2) The two ministers also shared the view that they would further strengthen Japan-France cooperation including in Africa.

(1) The two ministers confirmed that they would cooperate toward the early signing and entry into force of Japan-EU EPA.

(2) Minister Kono also stated that with regard to the United Kingdom’s exit from the EU, transparency and predictability were important. Minister Le Drian explained that he understood the concern that Japanese businesses could be affected and that France would try to make sure that Japanese businesses are not put to unfavorable position. He also confirmed that they would continue to exchange their views closely.

Minister Kono appreciated Minister Le Drian’s leadership in connection with the conference on the International Partnership Against Impunity for the Use of Chemical Weapons that was held in Paris on January 23. The two ministers shared the view on the need to advance United Nations Security Council (UNSC) reform promptly. They also confirmed that they would cooperate closely in such fields as disarmament and non-proliferation.

(1) With regard to North Korea, the two ministers shared the view that it was necessary to fully implement the relevant UNSC resolutions, as confirmed at the Fourth Japan-France Foreign and Defense Ministers’ Meeting held on the previous day.

(2) The two ministers also exchanged views on the situations in the Middle East and other matters.