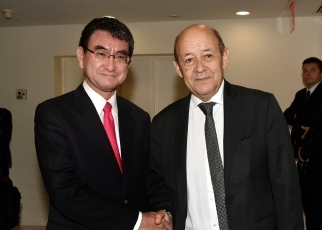 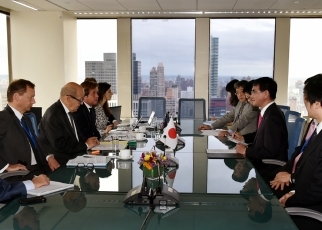 On September 20, commencing at 8:50 a.m. (local time) for approximately 20 minutes, Mr. Taro Kono, Minister for Foreign Affairs, who is visiting New York, the United States to attend the United Nations (UN) General Assembly, held a foreign ministers’ meeting with H.E. Mr. Jean-Yves Le Drian, Minister of Europe and Foreign Affairs of the French Republic. Its overview is as follows.

Foreign Minister Le Drian congratulated Foreign Minister Kono on his appointment and stated that he would like to continue to strengthen France’s relationship with Japan, which he had personally been fostering as a long relationship. In response, Minister Kono explained that Japan attached importance to relationship with France, with which Japan shared common fundamental values, and confirmed to strengthen collaboration. He also expressed his sympathy over the damage caused by Hurricane Irma to the French territory of Saint Martin and other locations.

(1) With regard to the North Korea problem, Minister Kono stated that he intended to encourage countries to fully implement the relevant UN Security Council (UNSC) resolutions, including the latest one. In addition, Minister Kono explained that North Korea was continuing with its provocative actions, and it would be essential to change North Korea’s policies by means of the international community as a whole exerting pressure on North Korea, including by involving China and Russia.

(2) In response, Foreign Minister Le Drian expressed France’s complete solidarity with Japan, and explained that France extremely strongly condemned North Korea’s actions and would like to respond firmly. Foreign Minister Le Drian demonstrated the recognition that it would be important to bring North Korea back to the dialogue table through efforts such as the full implementation of the UNSC resolutions.

(3) The two Ministers confirmed that Japan and France would cooperate closely in the international community, including at the UNSC, in responding to the North Korea problem.

Minister Kono explained that Japan attached importance to a free and open Indo-Pacific, and would like to cooperate with France to promote regional stability and prosperity including through the consolidation of the rule of law at sea. He stated that he appreciated the visit of the French task group “Jeanne d’Arc” to Japan and the joint training by Japan, France, the United Kingdom and the United States that took place in May this year. The two Ministers shared the importance of the compliance with international law, including the UN Convention on the Law of the Sea (UNCLOS), and also shared the view that they would strengthen security and defense cooperation between the two countries holding various discussions on such opportunities as “2+2” meetings.

The two Ministers shared the view that they would continue to cooperate closely in order to ensure the success of “Japonism 2018”, a major event for demonstrating Japanese culture that would be held next year, mainly in Paris.

(1) Minister Kono requested France’s cooperation for lifting the import restrictions by the European Union (EU) on products from Japan including foods from Fukushima, on a scientific basis. Foreign Minister Le Drian replied that this issue was an EU measure, but he would also like to follow it up personally.