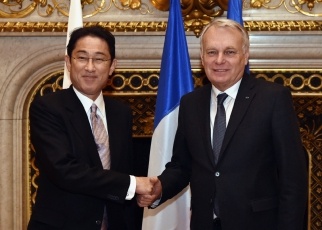 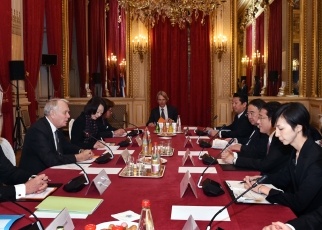 On January 6 from 5:30 p.m. for approximately 45 minutes, Mr. Fumio Kishida, Minister for Foreign Affairs of Japan, who is visiting France, held the Sixth Japan-France Foreign Ministers' Strategic Dialogue with H.E. Mr. Jean-Marc Ayrault, Minister of Foreign Affairs and International Development of France. The overview of the dialogue is as follows.

Minister Ayrault stated that he was glad that Minister Kishida chose France as the first country to visit this year, and that this symbolized the strategically important partnership between France and Japan. In response, Minister Kishida mentioned that he was glad he was able to visit France over four consecutive years and expressed his gratitude for the warm hospitality extended by France every time. In addition, as a terror incident in Turkey claimed French casualties and tomorrow marks two years since the terror attack against Charlie Hebdo in Paris, he expressed his condolences to the victims of terrorism and solidarity with France.

(2) Minister Kishida expressed his gratitude for the support by the French Government for “Japonism 2018,” an event which is to gather and demonstrate the spirit of Japanese culture at a large scale in Paris in 2018, and both Ministers confirmed their continued cooperation on it.

(4) Both Ministers confirmed that they would continue to cooperate to increase the flow of tourists between the two countries.

Both Ministers confirmed that they would cooperate toward the agreement in principle of the Japan-EU EPA (Economic Partnership Agreement) at the earliest possible timing. They also confirmed their collaboration in responding to the UK’s exit from the EU.

Both Ministers welcomed the early entry into force of the Paris Agreement, and confirmed that they would aim to construct a framework for respective countries to indicate their actions to reduce emission in a more transparent manner toward 2018, the deadline to adopt guidelines of implementing the agreement.

5. Case of a missing Japanese national

Minister Kishida asked for France’s cooperation to solve the case of a missing Japanese university student who was studying in Besancon. In response, Minister Ayrault stated that France would like to cooperate toward its solution through frequent sharing of information to the Japanese side.