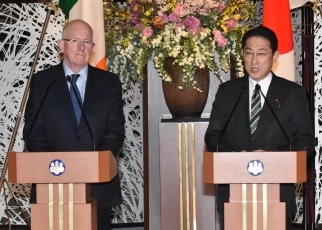 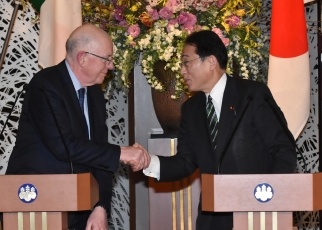 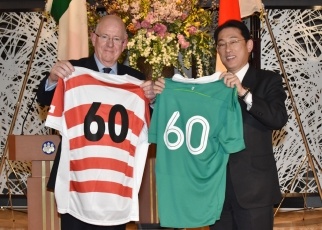 (2) After this, the two ministers exchanged jerseys of their national rugby teams with the number 60 on their backs to celebrate the 60th anniversary of the establishment of diplomatic relations between Japan and Ireland.

(3) The two ministers shared the view that on the occasion of the 60th anniversary of the establishment of diplomatic relations, in which mutual visits by foreign ministers have already been achieved at such an early timing, they would continue to follow up on the Joint Declaration on Partnership for Innovation and Growth (PDF)

between the Prime Minister of Japan and the Taoiseach of Ireland in 2013 to strengthen cooperation between the two countries in a wide range of areas including tourism, investment, academics, people-to-people exchanges, and sports.

2. The situation in Europe including the UK’s exit from the European Union

(1) Minister Kishida stated with regard to the UK’s exit from the European Union (EU) that Japan continued to closely following the situation with great interest, and would like to continue to cooperate with Ireland so that free and open economic activities will continue to be possible in the UK and the EU. Minister Flanagan stated that Ireland considered securing the free movement of people to be important, in addition to economic activities, even after the UK withdraws from the EU, and that he highly appreciated the Japan’s message to the UK and the EU.

(2) The two ministers confirmed that they would continue to collaborate closely towards an agreement in principle as early as possible on the Japan-EU Economic Partnership Agreement (EPA).

(1) Minister Flanagan explained his visit to Hiroshima, which he had made before the foreign ministers’ meeting, and stated that Hiroshima had been a most unforgettable experience and that all foreign ministers who come to Japan should visit Hiroshima. Taking into account Minister Flanagan’s Hiroshima visit on the occasion of this visit to Japan, the two ministers reconfirmed their shared hope for a “world free of nuclear weapons” and to deepen constructive discussions between the two countries to achieve this objective.

(2) The two ministers shared the view that they would explore further cooperation between the two countries for the capability-building of the UN Peacekeeping Operations personnel.

The two ministers also discussed such issues as the relationships with the United States, where the new Trump administration had been inaugurated, as well as the situation on North Korea.