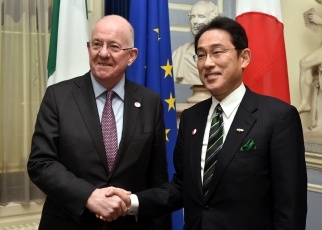 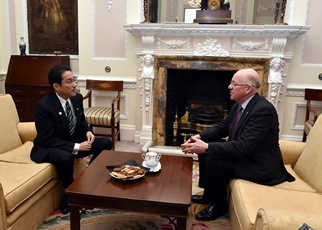 On Monday, January 9, Mr. Fumio Kishida, Minister for Foreign Affairs, who is visiting Ireland, held a Japan-Ireland Foreign Ministers’ Meeting with H.E. Mr. Charles Flanagan, T.D., Minister for Foreign Affairs and Trade of Ireland. The overview of the meeting is as follows. This meeting took place over a total of approximately 3 hours and 25 minutes, consisting of a discussion commencing at 6:00 p.m. until 6:50 p.m. and a working dinner commencing at 8:10 p.m. until 10:45 p.m.

(1) At the beginning, Minister Flanagan welcomed Minister Kishida’s visit, and stated that he hoped to celebrate the 60th anniversary of the establishment of diplomatic relations between Japan and Ireland on a grand scale with Minister Kishida. In response, Minister Kishida mentioned that he was happy to be able to visit Ireland in the commemorative year of the 60th anniversary, and looked forward to working closely with Minister Flanagan to further strengthen cooperation between the two countries in responding to the UK’s exit from the European Union (EU), and in the fields of disarmament and non-proliferation, and peace-building.
(2) The two ministers agreed that they would continue to follow up the contents of the joint declaration by the Prime Minister of Japan and the Taoiseach of Ireland “Partnership for Innovation and Growth”, issued on the occasion of the Japan-Ireland Summit meeting in 2013, and further advance the bilateral relations in such areas as the economy and people-to-people exchanges.

(1) Minister Kishida explained that Japan was closely following the situations of the UK’s exit from the EU and it would be important to maintain smooth business operations of companies in the UK and the EU as well as to ensure predictability. He further stated that he hoped to fully coordinate with Ireland, which has a close relationship with the UK, to minimize the negative impact arising from the UK’s exit from the EU. In response, Minister Flanagan explained that he believed the biggest challenges posed by the UK’s exit from the EU would be on the economic front and in ensuring the free movement of people. Minister Flanagan stated that this matter, which does not concern the economy alone, was the biggest challenge facing Ireland at present, and Ireland hoped to fully coordinate with Japan.
(2) The two ministers shared the view that amid increasing concerns about protectionist moves worldwide, Japan and the EU need to set an example by taking the initiative in leading free trade, and they confirmed that they would aim for an agreement in principle on the Japan-EU EPA as early as possible.

(1) The two ministers shared the view that they would strengthen cooperation in the field of peace-building, to which both countries attach importance. Minister Kishida explained that Japan was supporting United Nations (UN) training projects in such fields as facilities, communication, and protecting women, with the goal of enhancing the capabilities of UN Peacekeeping Operations (PKO) personnel. Additionally, with regard to the UN Security Council reform, Minister Kishida explained that he hoped to continue coordinating closely with Ireland to realize a reform which ensures transparency. In response, Minister Flanagan explained that Ireland had been attaching importance to the UN since it became a member of the UN, including by actively contributing to UN PKOs, and under the new Secretary-General of the UN, Ireland intended to work closely with Japan at the UN while maintaining effective communications.
(2) The two ministers also discussed disarmament and non-proliferation. Minister Kishida explained that in order to realize “a world without nuclear weapons” it would be necessary to accumulate realistic and practical measures based on cooperation between nuclear-weapon and non-nuclear-weapon states. In response, Minister Flanagan stated that Ireland shared the ultimate goal of “a world without nuclear weapons” with Japan, and he hoped to continue to cooperate constructively to realize that goal.

The two ministers exchanged views on relations with the United States, in which the next Trump administration would soon be established. The two ministers also discussed the situation in the Asia-Pacific region, including the East and South China Seas and North Korea, and agreed on the importance of maintaining the international order based on the rule of law.