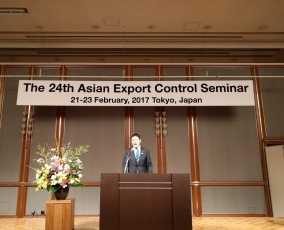 1. The 24th Asian Export Control Seminar was held at TKP Garden City Shinagawa, Tokyo, from February 21 to 23 (organized by the Center for Information on Security Trade Control (CISTEC); co-hosted by the Ministry of Foreign Affairs and Ministry of Economy, Trade and Industry).

2. Parliamentary Vice-Minister for Foreign Affairs Shunsuke Takei emphasized, at the inauguration of the seminar held on February 21, the increasing importance of each country’s efforts for strengthening non-proliferation and export controls, while the enhancement of North Korea’s nuclear and missile capacities has become a new level of threat for the non-proliferation system of not only the Asian region but also the international community at large.

3. This seminar was held to promote regional and international non-proliferation efforts by raising awareness and building confidence among competent authorities of export control of Asian countries and economies, and further enhancing their capacity for preventing proliferation of items and technologies which can be diverted for development of weapons of mass destruction into the hands of countries and regions of concern such as North Korea or terrorist organizations. Participants were the government officials in charge of export control from ASEAN member states, China, the Republic of Korea, India, as well as Australia, Canada, France, Germany, the United Kingdom, the United States of America and other countries and regions which share common interests in strengthening export control in the Asian region. Representatives from international export control regimes and the United Nations also took part in this event. The total number of participants was around 190 from different countries, regions and international organizations, among others.

4. In the seminar, members of the Panel of Experts established pursuant to UN Security Council resolution 1874 regarding sanctions against North Korea emphasized the necessity of strengthening efforts towards the implementation of the UN Security Council resolution 2321 adopted in November 2016 after the nuclear test conducted by North Korea. Also, active discussions on the importance of export controls as one of the counter-terrorism measures as well as concrete activities for it took place reflecting the changes in the international security environment as well as the strengthening of each country’s efforts as a result of such changes.