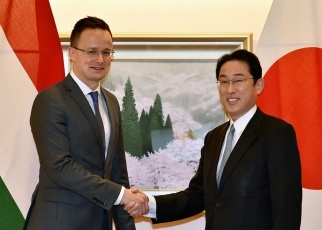 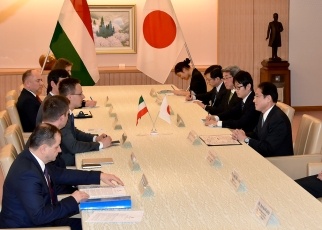 On February 13, commencing at 1:30 p.m. for approximately 50 minutes until 2:20 p.m., Mr. Fumio Kishida, Minister for Foreign Affairs, held a foreign ministers’ meeting in Tokyo with H.E. Mr. Péter Szijjártó, Minister of Foreign Affairs and Trade, Hungary. The overview of the meeting is as follows.

1. At the beginning, Minister Kishida welcomed that Minister Szijjártó was visiting Japan for the first time in three years, along with explaining that Japan is Hungary’s largest investor country in Asia and he is pleased that a powerful economic relationship exists between the two countries.
In response, Minister Szijjártó stated that he is happy to be able to meet again, and explained that Hungary highly appreciates the contributions of Japanese companies make to Hungary’s economy.

2. Japan-Hungary relations
Minister Kishida mentioned that 151 Japanese companies, chiefly manufacturers, have established businesses in Hungary since its democratization, and been contributing to Hungary’s economy through regionally-based sound activities, including the creation of 31,000 jobs. He asked for the Government of Hungary’s continued support for improving the investment environment.
Minister Szijjártó confirmed that the Government of Hungary will make efforts to improve the environment through tax system reform and other initiatives, in order to support Japanese companies in setting up new businesses and expanding investment.

3. Japan-EU cooperation, Japan-Visegrád Four (V4: see note) cooperation
The two ministers shared the view that the two countries will cooperate for the purpose of promptly reaching agreements in principle on the Japan-European Union (EU) Economic Partnership Agreement (EPA) and the Japan-EU Strategic Partnership Agreement (SPA). Additionally, Minister Szijjártó mentioned that Hungary will hold the V4 presidency from the latter half of this year, and expressed the intention to further strengthen cooperation with Japan in the V4 plus Japan framework. In response, Minister Kishida stated that Japan attaches importance to cooperation with V4, which steadily increases influence within the EU.

(Note) V4:
A framework for regional cooperation involving the Czech Republic, Poland, Slovakia and Hungary that was founded in Visegrád, Hungary, in 1991. In addition to holding foreign minister-level and high working-level dialogues with Japan, V4 plus Japan cooperation is also being pursued in fields such as the economy and promoting investment, development cooperation, climate change, energy conservation and the Eastern Partnership.