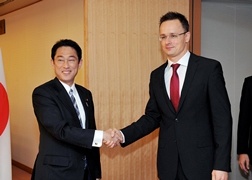 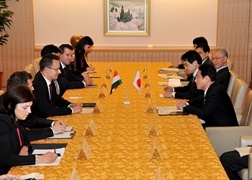 On November 5, commencing at 3:55 p.m. for approximately 30 minutes, Mr. Fumio Kishida, Minister for Foreign Affairs, held a meeting with H.E. Mr. Péter Szijjártó, Minister of Foreign Affairs and Trade of Hungary, in Tokyo. An overview of the meeting is as follows:

1. At the beginning, Minister Kishida congratulated Minister Szijjártó on his appointment as the Minister of Foreign Affairs and Trade. At the same time, Minister Kishida once again confirmed that Japan and Hungary are united by universal values such as democracy and rule of law and stated that it was pleasant that cooperation in a wide range of fields were progressing within a framework of “V4 + Japan.”

Minister Szijjártó stated that the Japan-Hungary relationship occupies an important part of Hungary’s diplomatic strategy. He said that Japan is an important partner for Hungary not only in bilateral relations but also in an international community, and he also expressed his willingness to strengthen the framework of “V4 + Japan.”

Touching upon the fact that Hungary has been strongly progressing its economic diplomacy, Minister Kishida requested the continuing and active support for more than 140 Japanese enterprises that have already advanced into Hungary. In response to this, Minister Szijjártó stated that the Government of Hungary would be committed to provide its full support of the activities by the Japanese enterprises.

The two ministers shared the view that they will accelerate negotiations for an early introduction of the Japan-Hungary working holiday scheme. Moreover, while Minister Kishida expressed his willingness to cooperate for the acceleration of negotiations aiming at an agreement in principle on the Japan-EU economic partnership agreement (EPA) within the year 2015, Minister Szijjártó stated that he will support an early conclusion of the Japan-EU EPA.

The two ministers exchanged opinions on the situation in Ukraine, situation in East Asia, and on the United Nations Security Council reform.