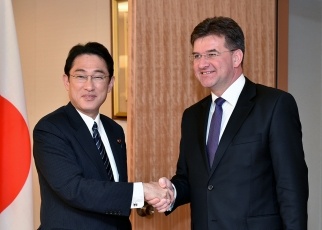 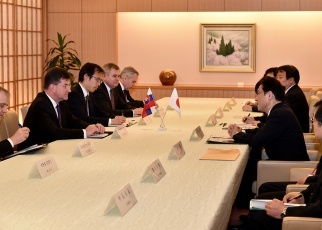 On Wednesday, May 18, commencing at around 4:05 p.m. for approximately 30 minutes, Mr. Fumio Kishida, Minister for Foreign Affairs, held a meeting with H.E. Mr. Miroslav Lajčák, Minister of Foreign and European Affairs of the Slovak Republic, during his visit to Japan. The overview of the meeting is as follows.

1. Bilateral Relations
In his opening remarks, Minister Kishida commented that this is the third meeting between the two ministers following their previous meeting in November 2015, and that Japan hopes to cooperate with Slovakia, which will hold the EU Presidency for the first time in the latter half of this year, at the bilateral level and also in relation to Japan-EU relations. Furthermore, Minister Kishida stated that the “V4 plus Japan” framework is very important and that Japan aims to utilize it effectively. Minister Lajčák expressed his hope that Japan and Slovakia will continue to deepen bilateral relations.
The two ministers expressed their expectation for the further promotion of bilateral exchange among young people through the Japan-Slovakia working holiday programme that begins on June 1, 2016.

2. Japan-EU Relations and Cooperation in International Fora
The two ministers confirmed their intent to continue to work together to reach agreement in principle on a Japan-EU Economic Partnership Agreement as soon as possible in 2016, as well as an early conclusion of negotiations on a Strategic Partnership Agreement. Additionally, the two ministers exchanged views on United Nations Security Council reform, and Minister Lajčák voiced support once again for Japan becoming a permanent member of the Security Council. The two ministers agreed to continue close collaboration between Japan and Slovakia.

(Reference) Japan-Slovakia working holiday programme
This will build a framework to give participants aged 18 to 30, who are citizens of partner countries holding a valid working holiday visa, permission to reside in the country for a period of one year from the day of their arrival and allow them to be employed without a work permit, as an incidental activity of their holiday for the purpose of supplementing their travel funds.