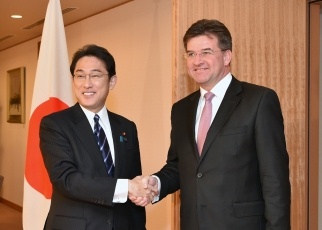 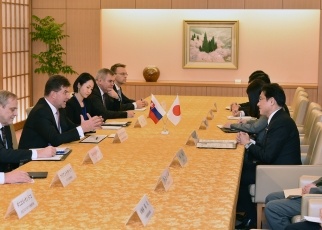 On November 25, commencing at 2:30 p.m. to 3:10 p.m. for approximately 40 minutes, Mr. Fumio Kishida, Minister for Foreign Affairs of Japan, held a foreign ministers’ meeting with H.E. Mr. Miroslav Lajcak, Deputy Prime Minister and Minister of Foreign and European Affairs of the Slovak Republic in Tokyo. The overview of the meeting is as follows.

1. Opening Remarks
Minister Kishida started the meeting by mentioning the holding of the 6th Meeting of Ministers of Foreign Affairs of the Visegrad Group (V4) plus Japan in Luxembourg on November 5, and stated that he was happy to be able to meet with Minister Lajcak, who served as Slovakia’s ambassador in Tokyo, once again following the meeting in Luxembourg. He noted that Slovakia is a partner that shares the same fundamental values with Japan, and Japan intends to collaborate not only in regard to bilateral cooperation with Slovakia, which will serve as the first European Union (EU) presidency holder in the latter half of next year, but also Japan-EU relations. Minister Lajcak expressed his gratitude for the welcome, and stated that this was his third visit to Japan as foreign minister, and each time he visits, he gets the strong impression that bilateral relations have further deepened. He then commented that he hopes the two countries will cooperate further in the future.

The two ministers welcomed that they reached to basic consensus to introduce a Japan-Slovakia working holiday programme, and they affirmed that they will aim for this arrangement to be put into operation at an appropriate time next year. They then expressed their hope that the arrangement will further promote exchanges between the young persons of their countries.

2. Fight Against Terrorism
Minister Kishida stated that the terrorist attacks that occurred in Paris were a challenge against the values that Japan and Slovakia share, and the international community must stand united in resolutely condemning these acts. He also commented that Japan will fulfill its responsibilities in the international community with a view to solving the issue of the violent extremism at the root of terrorism.

Minister Lajcak stated that the international community must stand united against terrorism, and fight it in a resolute manner.

3. Bilateral Relations and Cooperation in the International Arena
Minister Kishida touched upon the mutual visits by top-level officials in recent years, and stated that he intends to give further vitality to dialogues between the two countries based on the continuation of high-level exchanges.

Minister Lajcak stated that he supports Japan’s policy of “Proactive Contribution to Peace” and welcomes Japan’s establishment of legislation for peace and security.

Regarding the topic of economic relations, Minister Kishida pointed out that approximately 50 Japanese companies have expanded their business to Slovakia, creating a total of over 10,000 jobs there, and stated that he anticipates that Japanese companies will make further contributions to Slovakia’s economy. In relation to this, he made a request to Slovakia to further improve its investment environment through developing roads and other infrastructure, facilitating residence permit procedures, and so on.

The two ministers then exchanged opinions concerning V4 plus Japan cooperation. They highly praised the 6th Meeting of Ministers of Foreign Affairs of V4 plus Japan held on November 5, and agreed to continue utilizing the V4 plus Japan framework, which is delivering concrete outcomes in the fields of ODA ,science and technology, and so on.

(Note) Japan-Slovakia working holiday programme
This will build a legal framework to give participants, who are citizens of partner countries holding a valid visa, permission to reside in the country for a period of one year from the day of their arrival and allow them to be employed without a work permit, as an incidental activity of their holiday for the purpose of supplementing their travel funds.

(Note) V4
This is a framework for regional cooperation involving the Czech Republic, Poland, Slovakia, and Hungary that was founded in Visegrad, Hungary in 1991. In addition to holding foreign minister-level and high working-level dialogues with Japan, V4 plus Japan cooperation is also being pursued in fields such as promoting economy and investment, development cooperation, climate change, energy conservation, and the Eastern Partnership.