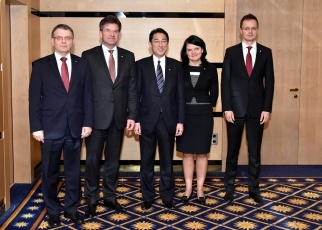 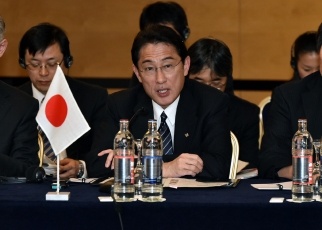 (After the meeting ended, a joint press statement summing up the content of the meeting was released (English (PDF)

2. Review of V4 plus Japan Cooperation and the Future Outlook

Minister Kishida and the V4 foreign ministers appreciated the adoption of five joint research projects between the Japan Science and Technology Agency (JST) and relevant organizations of V4 side this year as a major outcome, and shared the view that concrete cooperation will be promoted in the future as well.

Minister Kishida and the V4 foreign ministers also appreciated that mutual exchanges were promoted last year, the V4 plus Japan Exchange Year, and expressed their expectation that going forward, people-to-people links will be strengthened through sports in the run up to the 2020 Olympic and Paralympic Games in Tokyo.

In addition, the two sides exchanged views on possible future cooperation, such as development cooperation and the promotion of trade and investment.

Minister Kishida and the V4 foreign ministers reaffirmed the importance of reaching an agreement in principle this year on the Japan-EU Economic Partnership Agreement (EPA), which is currently being negotiated, and of promptly concluding the Japan-EU Strategic Partnership Agreement (SPA), and shared the view that they will cooperate to advance the negotiations on both agreements.

In addition, in regard to regional and international affairs, Minister Kishida explained the recent situation in East Asia, and the V4 side expressed perception in relation to the situation in Ukraine.

(Note) V4: A framework for regional cooperation involving the Czech Republic, Poland, Slovakia and Hungary that was founded in Visegrad, Hungary, in 1991. In addition to holding foreign minister-level and high working-level dialogues with Japan, V4 plus Japan cooperation is also being pursued in fields such as the economy and promoting investment, development cooperation, climate change, energy conservation and the Eastern Partnership.