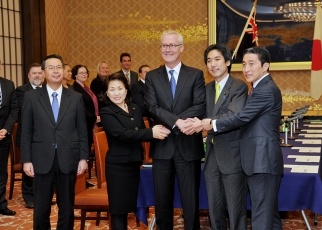 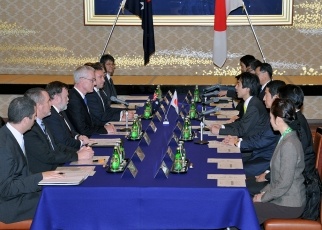 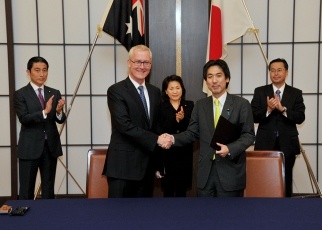 1. The Japan-Australia Economic Partnership Agreement (EPA) entered into force on January 15, 2015, which was signed on July 8, 2014 in Canberra, following the completion of respective necessary legal procedures in both countries. On this occasion, Prime Minister of Japan, Shinzo Abe and Prime Minister of the Commonwealth of Australia, Tony Abbott issued a Joint Statement.

2. The first meeting of the Joint Committee established under the Japan-Australia EPA was held in Tokyo on January 15, 2015. The Joint Committee made the necessary decisions required for the implementation of this Agreement, including adoption of the EPA’s Operational Procedures as well as Rules and Procedures of Arbitral Tribunals. The meeting was attended by Minoru Kiuchi, State Minister for Foreign Affairs, Satoshi Oie, Parliamentary Vice Minister of Finance, Toshiko Abe, State Minister for Agriculture, Forestry and Fisheries and so on. Australia was represented by its Ambassador to Japan, H.E. Mr. Bruce Miller.

3. It is expected that entry into force of this Agreement will further strengthen Japan-Australia bilateral relations through greatly invigorating the economies of the two countries.