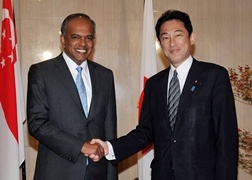 1. At the beginning, Minister Kishida stated that amid the changing strategic environment in the region, Japan places emphasis on further strengthening of the relationship with Singapore, with which it shares the basic concept regarding the peace and stability of the region and the international community. Minister Kishida also stated that he hopes to have a frank exchange of views on challenges facing the region and the international community in the lead up to the ASEAN-related Summit Meetings next month. In response, Minister Shanmugam welcomed the steady development of cooperative relationship and close communications between the two countries. He also stated that Singapore attaches importance to Japan’s fulfilling a greater role in the region and would like to strengthen the cooperative relationship further.

2. Following this, the two ministers exchanged views on the three points.

Minister Kishida stated the anniversary will be an important opportunity to appreciate the steady progress of the bilateral ties and to realize further strengthening of bilateral exchanges. He said he hopes to utilize various commemorative events and activities so that the anniversary is celebrated magnificently by the citizens of both countries. The two ministers shared the view that the two countries will work together to move the preparations steadily forward.

Minister Kishida stated that the two countries currently enjoy an extremely friendly relationship and expressed his expectation to expand this even more. As a specific initiative, he proposed to expand the third country cooperation via the JSPP21 (see note) further by accepting more trainees from countries outside Southeast Asia from the next fiscal year. The two ministers shared the view to implement such an expansion and to instruct the officials to consider the detail.

Minister Kishida also explained Japan’s initiatives based on the principle of “proactive contribution to peace,” including the recent Cabinet decision on basic policies on the development of security legislation. Minister Shanmugam reiterated Singapore’s position of welcoming Japan’s “proactive contribution to peace” policy, and said he hopes Japan will play a more active role in achieving regional peace and stability.

Minister Kishida explained Japan’s basic position on issues such as the importance of the rule of law at sea, along with conveying his expectation that progress will be made in discussions between ASEAN and China on a Code of Conduct (COC) in the South China Sea. The two ministers confirmed the importance of observance of international law.

In addition, Minister Kishida said that Japan will continue to support ASEAN going forward, toward the creation of the ASEAN Community next year, and also that Japan attaches importance to strengthening the East Asia Summit (EAS), which will celebrate its 10th anniversary next year. He stated Japan puts emphasis on ASEAN’s centrality in the EAS and supports its efforts on all fronts to strengthen the framework. Based on the importance of this agenda, the two ministers shared the view to continuously cooperate with each other.

(Note) The JSPP21 (Japan-Singapore Partnership Program for the 21st Century)

JSPP21 is a framework for the joint third-country training program between Japan and Singapore. The program was launched in 1997 and has accepted officials mainly from Southeast Asia countries in Singapore to provide training courses, by experts dispatched from Japan, in various fields including enhancing connectivity and disaster reduction.