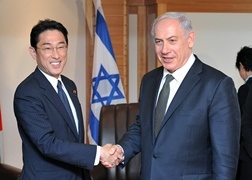 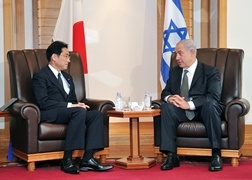 On May 13, commencing at 4:00 p.m. for approximately 45 minutes, Minister for Foreign Affairs Mr. Fumio Kishida made a courtesy call on H.E. Mr. Benjamin Netanyahu, Prime Minister of the State of Israel, who is paying an official working visit to Japan. The overview of the meeting is as follows.

(1) Prime Minister Netanyahu said that during this trip to Japan, which is his first visit in 17 years, he sensed great dynamism in Japan-Israel relations. He explained that the two countries’ have many common points, including advanced technologies, common values such as democracy and furthermore a determination to achieve global stability and peace, hence Japan and Israel are natural partners and he wants to continue to promote future cooperation.

(2) Minister Kishida once again expressed gratitude for the warm welcome he received when he visited Israel in July last year, and expressed his satisfaction that the discussions he held with Prime Minister Netanyahu at that time led to produce a large number of results at the Summit Meeting held on the previous day. Minister Kishida also said he intends to make further efforts to strengthen bilateral relations.

(1) Minister Kishida emphasized that (a) Japan has consistently asked both parties concerned to negotiate earnestly; and (b) Japan has provided economic assistance to Palestine in order to encourage progress with the negotiations, and in particular has proactively promoted the “Corridor for Peace and Prosperity” and the Conference on Cooperation among East Asian Countries for Palestinian Development (CEAPAD), unique initiatives by Japan. Minister Kishida asked that both parties concerned exercise the utmost self-restraint regarding unilateral measures, including settlement activities by the Israel side, and make an effort to resume the peace negotiations, and also asked for cooperation on the Jericho Agricultural Industrial Park (JAIP), which Japan supports.

(2) In response, Prime Minister Netanyahu mentioned the necessity of achieving peace with Palestine, while noting that Palestine is pursuing national reconciliation with Hamas, which advocates the destruction of Israel, and so the prospect of achieving peace with Palestine is difficult. At the same time, where the economic advancement and development of Palestine is concerned, Prime Minister Netanyahu showed an understanding for Japan’s initiatives as making a contribution to peace.

3. They also discussed the issue of nuclear development in Iran and North Korea. In particular, Minister Kishida emphasized that it is essential for the Iranian nuclear issue to be resolved diplomatically and peacefully, and said the Government of Japan’s position is that it is important for the international community, including Israel, to support efforts between the EU 3+3 and Iran and to play a constructive role. Prime Minister Netanyahu expressed concern about Iran’s nuclear program and emphasized the need to resolve the problem.