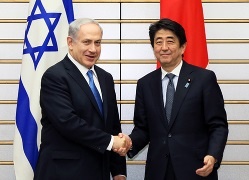 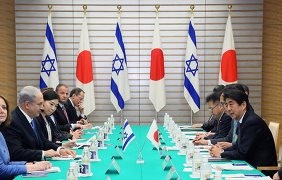 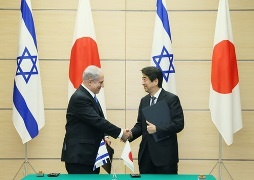 On May 12, commencing at 6:00 p.m. for approximately one hour and 15 minutes, Prime Minister Shinzo Abe held a Summit Meeting with H.E. Mr. Benjamin Netanyahu, Prime Minister of the State of Israel, during his official working visit to Japan, at the Prime Minister's Office. An overview of the meeting is as follows. Following the meeting, the Japan-Israel Joint Statement (PDF)

Prime Minister Abe expressed his intention of striving to further strengthen bilateral relations based on many years of friendly relations. Both Prime Ministers confirmed more active exchanges at the level of Prime Ministers, Ministers and high ranking officials, and in particular, in the security and defense areas they affirmed the launch of an exchange of views between national security agencies, the promotion of exchanges between defense authorities, and cooperation in the cyber security field. Additionally, Prime Minister Abe told Japan contributes even more proactively to the peace and stability of the regional and international community through the policy of a “Proactive Contribution to Peace,” and continues to cooperate with Israel, with which it shares values such as freedom and democracy. Prime Minister Netanyahu welcomed such a policy.

Prime Minister Abe proposed commencing work toward launching negotiations on an investment agreement, and promoting cooperation in areas such as joint industrial research and development, science and technology, including the space field, food culture and tourism. Prime Minister Netanyahu welcomed these proposals, along with emphasizing the possibility of bilateral cooperation in the field of innovation. Additionally, Prime Minister Netanyahu expressed his decision to lift import restrictions applied by Israel following the Great East Japan Earthquake.

Prime Minister Abe proposed encouraging the realization of direct flights between Japan and Israel, which has been agreed upon, as well as expanding educational exchanges and exchanges among parliamentarians and launching consultations to introduce the Working Holiday Visa program. Prime Minister Netanyahu welcomed these proposals. Both Prime Ministers also shared the view that they will cooperate on dispatching judo instructors to Israel and Palestine, and on promoting the advancement of women.

Prime Minister Abe emphasized three points: (a) Recommencing the suspended peace talks as quickly as possible would be beneficial to both parties concerned; (b) Utmost self-restraint is called for regarding unilateral measures that will hinder the talks, including settlement activities; and (c) Japan will fulfil an active role in encouraging a two-state solution that achieves the peaceful coexistence of both concerned parties. Additionally, Prime Minister Abe explained the Government of Japan’s current assistance for Palestine, and in particular requested further cooperation from Israel for the “Corridor for Peace and Prosperity” that aims at developing the Palestinian economy through regional cooperation. In response, Prime Minister Netanyahu explained the efforts that Israel has made thus far, including cooperating on a two-state solution, freezing settlement activities and releasing Palestinian prisoners, and then explained that Palestine’s goal of pursuing national reconciliation with Hamas and integrating it into the Palestinian government is regrettable and is evidence that the preparations for achieving peace are not in place.

Both Prime Ministers discussed the situation in the Middle East region, including Iran and Syria. In particular, with regard to Iran, Prime Minister Abe explained that the Government of Japan’s position is that: (a) A diplomatic and peaceful solution to Iran’s nuclear problem is vital for achieving regional stability; (b) Japan is undertaking independent lobbying efforts that include meeting with Hassan Rouhani, President of Iran, last year, and dispatching Minister for Foreign Affairs Fumio Kishida to Iran subsequently; and (c) It is important that the international community supports the current efforts between the EU 3+3 and Iran based on the Joint Plan of Action and plays a constructive role. Prime Minister Netanyahu expressed his concern about Iran’s nuclear program and emphasized the necessity of resolving that problem.

Prime Minister Abe explained the increasingly severe security environment in East Asia. Both Prime Ministers confirmed they will strengthen cooperation toward the peace and stability of the Asia-Pacific region.