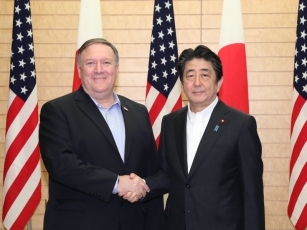 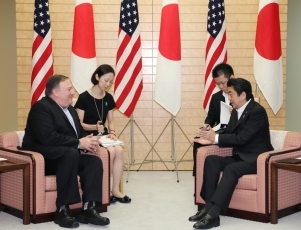 On July 8, commencing at around 9:50 a.m. for approximately 50 minutes, Prime Minister Shinzo Abe received a courtesy call from The Honorable Mike Pompeo, Secretary of State of the United States, during his visit to Japan. The overview of the meeting is as follows.

2. Secretary Pompeo explained in detail his exchanges with North Korea during his recent visit to North Korea from July 6 to 7.

3. The two sides confirmed their shared goal of seeking the dismantlement of all weapons of mass destruction and ballistic missiles of all ranges in a complete, verifiable, and irreversible manner, and shared the view that they would work together to urge North Korea to take concrete actions toward the complete implementation of the United Nations Security Council (UNSC) resolutions.

4. Prime Minister Abe expressed his gratitude to President Trump for raising the abductions issue during the previous U.S.-North Korea Summit. The two sides confirmed that Japan and the United States will continue to coordinate closely to promptly resolve the abductions issue.