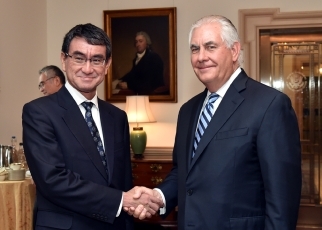 On Thursday, August 17, commencing at shortly after 2:00 p.m. (local time) for approximately 40 minutes, Mr. Taro Kono, Minister for Foreign Affairs, who is visiting the United States of America, held a Japan-U.S. Foreign Ministers’ Meeting with the Honorable Rex W. Tillerson, Secretary of State of the United States. The overview of the meeting is as follows.

Secretary Tillerson stated that the foreign ministers’ meeting recently held in Manila was very short, but he hoped to conduct a solid discussion at today’s meeting. In response, Minister Kono explained that the recent Japan-U.S. Security Consultative Committee (SCC) (the “2+2” Ministerial Meeting)was extremely meaningful, and the Japan-U.S. Alliance forms the foundation for strengthening, improving and extracting proactive contributions not only from the Japan-U.S. relationship but from the two countries’ relationships with other countries as well. Minister Kono stated that he hoped to deepen debate on the economy, which is another pillar of the alliance alongside with security, and international affairs. Secretary Tillerson showed his concurrence.

Minister Kono mentioned that he recently held his first foreign ministers’ meeting with Mr. Sergey Viktorovich Lavrov, Minister of Foreign Affairs of the Russian Federation, and discussed Japan-Russia relations, including the issue of concluding a peace treaty. Minister Kono and Secretary Tillerson shared the recognition that it is important to continue to keep in contact and hold dialogues with Russia all the more because the international community faces a difficult situation.

Minister Kono and Secretary Tillerson shared their view on the importance of rule of law at sea. In addition, Minister Kono stated that he looks forward to seeing the United States proactively engaging with the Comprehensive Nuclear-Test-Ban Treaty (CTBT), such as by promptly ratifying ion the Treaty. The two sides shared the view that Japan and the United States will cooperate on nuclear nonproliferation.

Minister Kono and Secretary Tillerson confirmed that in order to hold meaningful dialogues with North Korea, it is important that North Korea demonstrates serious will and concrete actions towards denuclearization, and they shared the view that it is necessary to apply maximum pressure on North Korea. Furthermore, the two sides shared the recognition that it is important for Japan, the United States and the Republic of Korea to continue to coordinate closely.