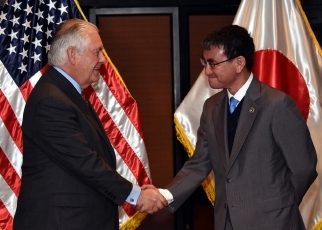 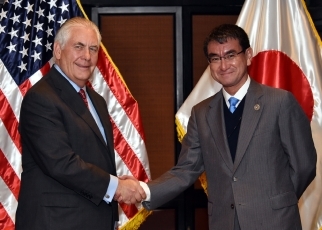 On Monday, August 7, commencing at shortly after 9:50 a.m. for approximately 10 minutes, Mr. Taro Kono, Minister for Foreign Affairs, during his visit to Manila, the Philippines, to attend ASEAN-related Foreign Ministers' Meetings, held a Japan-U.S. Foreign Ministers' Meeting with the Honorable Rex W. Tillerson, Secretary of State of the United States of America, for the first time since his appointment as Foreign Minister. The overview of the meeting is as follows.

1. The two sides shared the recognition that the Japan-U.S. Alliance is the cornerstone for regional and global peace and stability and that in order to further strengthen the Alliance it is essential for the two sides to engage in close cooperation, which supports the strong bond between the two leaders.

2. Minister Kono welcomed the adoption of United Nations Security Council (UNSC) Resolution 2371, which includes further sanctions on North Korea. The two sides shared the view that Japan and the United States will continue to coordinate closely to ensure the effectiveness of the relevant UNSC resolutions, including UNSC Resolution 2371.

3. With regard to the mishap involving an MV-22 Osprey off the coast of Australia, Minister Kono expressed his sympathy and heartfelt wishes for the swift recovery of the injured and the safe return of the missing. Given the high attention to this mishap in Japan, he requested investigations into the cause, the provision of information and the implementation of measures to prevent recurrence. Minister Kono requested Secretary Tillerson to engage in this matter,in addition to current coordination between the defense authorities.

4. The two sides confirmed that they will hold the Japan-U.S. Security Consultative Committee (SCC) (the “2+2” Ministerial Meeting) in Washington D.C. in the United States on August 17 (U.S. time).