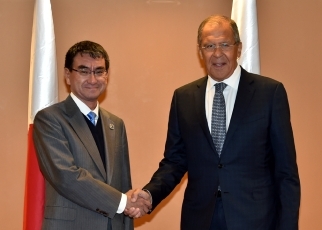 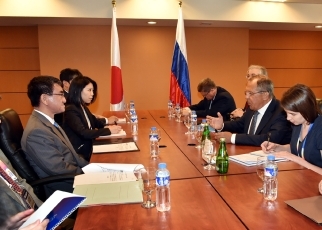 On August 7, for approximately 35 minutes, Mr. Taro Kono, Minister for Foreign Affairs, held his first foreign ministers’ meeting with Mr. Sergey Viktorovich Lavrov, Minister of Foreign Affairs of the Russian Federation, in Manila, the Philippines, on the sidelines of the ASEAN-related Foreign Ministers’ Meetings.

Minister Lavrov extended an invitation to Minister Kono to visit Russia and the ministers agreed to consider a specific schedule of the visit.

1. Issue of the Northern Territories

The ministers confirmed the progress with the matters agreed upon at the summit meetings held in Nagato in December last year, in Moscow in April this year, and in Hamburg in July this year, in preparation for a Japan-Russia Summit Meeting on the occasion of the Eastern Economic Forum, which will be held in Vladivostok in September.

The ministers agreed to hold a Japan-Russia vice-ministerial consultation in Moscow on August 17 and to discuss how to realize economically meaningful projects as soon as possible in a manner that does not harm the legal positions of either side, based on the findings from the local research held by the joint public and private research team at the end of June.

The ministers welcomed a visit to the Seseki area on Kunashiri Island at the beginning of August. They also confirmed that Japan and Russia will work together to realize a special grave visit by airplane in September at an appropriate timing that is still being coordinated.

The ministers discussed expected outcomes in economic areas, such as the Tax Convention for the avoidance of double taxation between Japan and Russia, in preparation for the Japan-Russia Summit Meeting in September.

Minister Kono pointed out that it is necessary to increase pressure on North Korea in order to change its behaviors. The ministers also confirmed that Japan and Russia will work together at various levels in relation to the issue of North Korea.