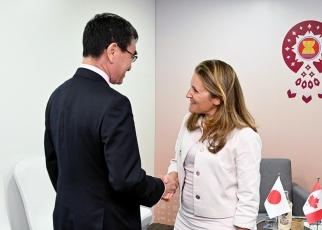 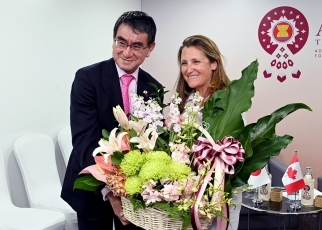 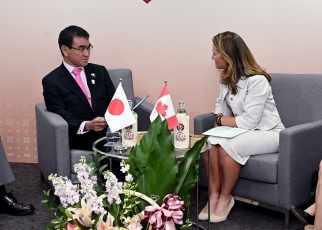 On August 1, commencing at 2:30 p.m. (local time) for approximately 30 minutes, Mr. Taro Kono, Minister for Foreign Affairs, who was visiting Thailand to attend Association of Southeast Asian Nations (ASEAN)-related Foreign Ministers' Meetings, held a Japan-Canada Foreign Ministers' Meeting with the Honourable Chrystia Freeland, Minister of Foreign Affairs of Canada. The overview of the meeting is as follows.

1. At the beginning, Minister Kono congratulated Minister Freeland on her birthday on the next day. Minister Kono expressed his gratitude for Canada’s cooperation for the success of the G20 Osaka Summit.

2. The two foreign ministers shared the view that Japan and Canada would strategically promote cooperation and coordination, including dialogues, under the recognition that their endeavor based on the vision of a free and open Indo-Pacific, which their leaders shared in April, is important for the regional peace and prosperity.

3. The two foreign ministers shared the view, in light of North Korea’s recent actions including launches of short-range ballistic missiles, that it remains important to support the U.S.-North Korea talks in order to realize the complete, verifiable, and irreversible dismantlement (CVID) of all weapons of mass destruction and ballistic missiles of all ranges in accordance with the UNSCRs by North Korea. Minister Kono also requested continued understanding and cooperation towards the early resolution of the abductions issue, for which Minister Freeland expressed her support.