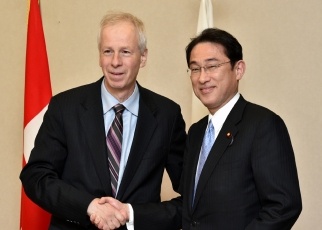 On Saturday, April 9, commencing at 8:40 p.m. for approximately 85 minutes, Mr. Fumio Kishida, Minister for Foreign Affairs of Japan, held a Japan-Canada Foreign Ministers’ Meeting with the Honourable Stéphane Dion, Minister of Foreign Affairs of Canada, during his visit to Hiroshima to attend the G7 Foreign Ministers’ Meeting. The overview of the meeting is as follows.

1. Minister Kishida said that he is honored to be able to welcome Minister Dion to his hometown Hiroshima, and stated his intention to hold candid and open discussions regarding global issues such as nuclear disarmament and non-proliferation, and counter-terrorism measures, and regional situations at the G7 Foreign Ministers’ Meeting to be held from the following day. Furthermore, Minister Kishida explained that the Hiroshima Declaration would present to the world a vision for cooperation between nuclear-weapon states and non-nuclear-weapon states, through realistic and practical measures, towards the realization of a world without nuclear weapons, and expressed his joy that the G7 would be able to send a strong message from Hiroshima, which suffered an atomic bombing.

3. Minister Kishida expressed his intention for Japan and Canada to further contribute to the peace and prosperity of the region and the world, through Minister Dion’s foreign policy orientation based on “responsible conviction”1 and Japan’s concept of “Proactive Contribution to Peace” based on the principle of international cooperation. In addition, Minister Kishida stated that he intends to strengthen bilateral relations, including cooperation in security. In response, Minister Dion agreed with all of Minister Kishida’s statements. Furthermore, the two Ministers affirmed that they will hold the upcoming Political, Peace and Security Subcabinet “2＋2” Dialogue in Tokyo on April 19th and agreed to advance security cooperation as an important pillar of Japan-Canada cooperation.

4. In addition, the two Ministers agreed to further strengthen economic relations through measures to strengthen economic dialogue and the promotion of private-sector exchange. In particular, Minister Kishida requested that preparations be made for the early realization of the export of Canadian liquefied natural gas to Japan, and that further measures be taken to improve the business environment in Canada, including visa-related issues for members of Japanese companies. Minister Dion stated that he would continue to exert efforts to achieve positive results.

5. Regarding TPP, Minister Kishida stated his intention to discuss its strategic significance, and expressed his hope that Japan and Canada, as countries that support free trade, will deepen the understanding of the Japanese and Canadian peoples, and work together towards the early entry into force of the TPP Agreement. The two Ministers also affirmed that they will promote domestic discussions regarding TPP in their respective countries.

6. Moreover, the two Ministers exchanged views on regional affairs, including in the Asia-Pacific region, and reaffirmed their shared view that North Korea’s nuclear and missile development poses a grave threat to the peace and security of the region and the international community, and that Japan and Canada would work together to ensure the thorough implementation of the relevant United Nations Security Council resolutions. In addition, both Ministers confirmed that Japan and Canada share the recognition that unilateral attempts to change the status quo are a common concern for the international community, among other matters.