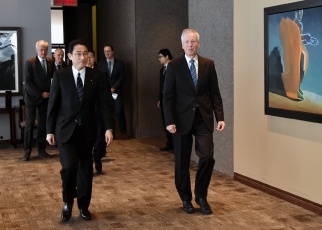 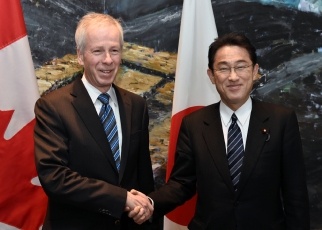 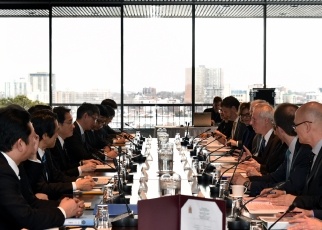 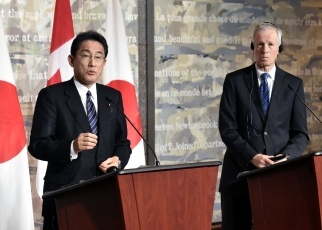 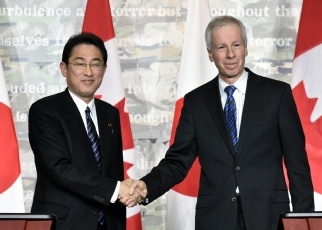 On February 12, commencing at 4:00 p.m. for approximately 90 minutes, Mr. Fumio Kishida, Minister for Foreign Affairs of Japan, during his visit to Canada, held a Japan-Canada Foreign Ministers' Meeting with the Honourable Mr. Stéphane Dion, Minister of Foreign Affairs of Canada, in Ottawa. On the same day, commencing at 6:00 p.m. for approximately 120 minutes, the two ministers had a working dinner. The overview of the meeting and working dinner is as follows.

1 Minister Kishida stated that Japan, as the country holding the G7 Presidency this year would aim to collaborate and cooperate even more closely with Canada, an important partner in the Asia-Pacific region, and to lead the international community in addressing the current urgent issues such as North Korea, terrorism and cyber related issues. Minister Kishida also stated that Japan hopes to present the most appropriate ways to promote peace and prosperity in the region and the world at the Ise-Shima Summit in its role as the G7 Chair, sharing the core values of freedom, democracy, rule of law, and human rights. Minister Kishida expressed his hope to work closely with Minister Dion to this end.

2 Minister Dion commented that both Japan and Canada are exemplary countries in the world and appreciated the sound relations between Japan and Canada. Minister Dion also acknowledged Japan's great responsibilities this year both as a non-permanent member state of the United Nations Security Council (UNSC) and as the G7 Chair. He also welcomed Minister Kishida's visit to Canada in the midst of busy preparations for the Hiroshima Foreign Ministers' Meeting and the Ise-Shima Summit and stated the importance of the visit in strengthening the Japan-Canada relationship.

3 Regarding North Korea, the two Ministers agreed that the launch of a ballistic missile following its nuclear test in January was totally unacceptable, stating that the international community needs to cooperate in making a firm response and that it is important for the UNSC to swiftly adopt a decisive resolution for this purpose. Minister Dion supported Japan's firm response through the implementation of its own measures and other actions aimed at achieving comprehensive resolution of outstanding issues such as abductions, nuclear and missile issues.
4 At the working dinner, the two Ministers shared the views on bilateral relations, particularly with regard to their economic relationship, as well as on the regional situations and cooperation at international fora, and agreed that the two countries would continue to work closely in addressing various regional and global issues.