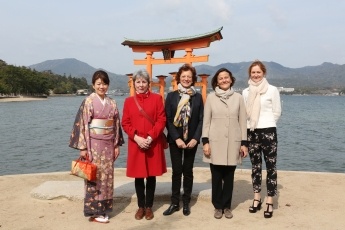 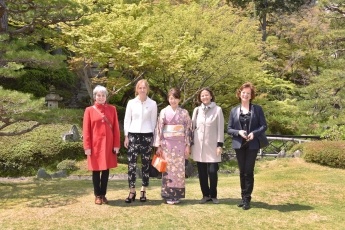 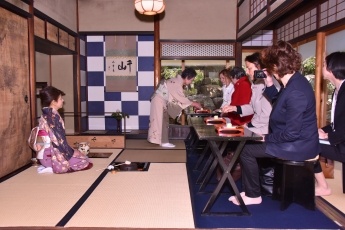 The spouses of the Foreign Ministers were led by Mrs. Kishida on a visit to Miyajima Island, one of Japan's three great scenic views, where they were welcomed by local elementary and kindergarten children. They also paid a visit to Itsukushima Shrine, a UNESCO World Heritage Site, where they received an explanation from a Shrine representative about the history of Miyajima Island and the Shrine, and enjoyed a performance of Bugaku court music and dance.

Afterward, the spouses of the Foreign Ministers visited a teahouse in Hiroshima City, where the spouses performed a Japanese tea ceremony after watching a demonstration by Mrs. Kishida, and deepened their understanding of traditional Japanese culture.

Throughout the two-day program, Mrs. Kishida and the other spouses of the Foreign Ministers experienced the natural beauty of Hiroshima and its rich culture, while also getting more acquainted with one another in a relaxed atmosphere, enjoying cuisine prepared from the wealth of foods produced in Hiroshima Prefecture.