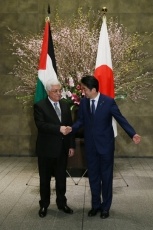 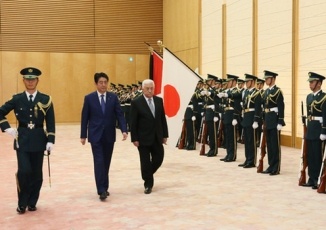 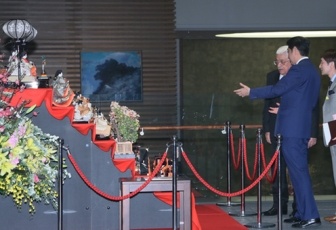 On February 15, commencing at 6:25 p.m. for approximately 45 minutes, Mr. Shinzo Abe, Prime Minister of Japan, held a summit meeting with H.E. Dr. Mahmoud Abbas, President of Palestine, who was making a working visit to Japan, at the Prime Minister’s Office. The overview of the meeting is as follows. 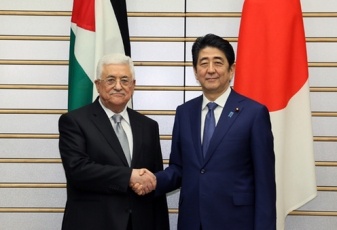 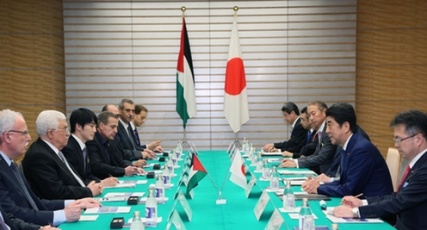 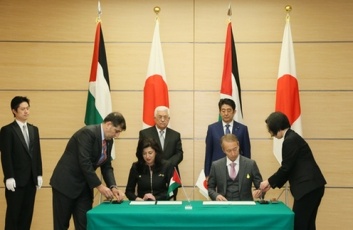 (1) Prime Minister Abe stated the following.
Japan has been steadily engaging in the economic development and human resources development needed for Palestine’s nation building. Japan recently decided to extend new support worth more than USD 78 million to Palestine. I am delighted that operations have commenced at the Jericho Agro-Industrial Park (JAIP), a core project in the “Corridor for Peace and Prosperity” initiative. I hope cultural grant assistance related to preservation and presentation of Hisham’s Palace in Jericho will contribute to Palestine’s tourism development. Japan recently hosted the Senior Officials Meeting of the Conference on Cooperation among East Asian Countries for Palestinian Development (CEAPAD) and participants discussed assistance for Palestine that utilizes the knowledge of East Asian countries.

(2) In response, President Abbas stated the following.
I am extremely grateful for the new support announced by Japan. I feel proud of Japan’s “Corridor for Peace and Prosperity” initiative. I am thankful for Japan’s steady support for Palestine. I expect that the commencement of production at JAIP will bring peace to the region. I am also grateful for CEAPAD.

2. Peace in the Middle East

(1) Prime Minister Abe stated the following.
I note that the Palestine issue is a fundamental and historic issue that Middle East faces, and express concern over the deteriorating local situation in Palestine and the stalled peace process. I support President Abbas’ efforts for peace through non-violence and dialogue. As a non-permanent member of the United Nations Security Council (UNSC) and holder of the G7 Presidency, I would like to closely coordinate with President Abbas and make further contributions to reaching a stable solution in the Middle East.

(2) President Abbas stated the following.
Relations between Palestine and Israel remain deadlocked. I hope that this situation will change. If an international conference on Middle East peace is held in the future, I hope Japan will also participate. Settlement activities by Israel are a violation of international law and an obstacle to a two-state solution. However, there is no change to my position of resolving the issue through negotiations with Israel. I hope Japan will play an even more proactive role in achieving peace in the Middle East.

In addition, the two leaders exchanged views on regional affairs, including Syria, and President Abbas emphasized his position of opposing terrorism and violent extremism. 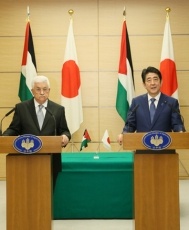