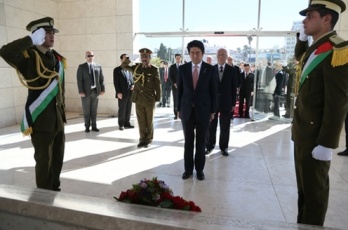 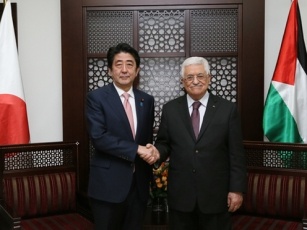 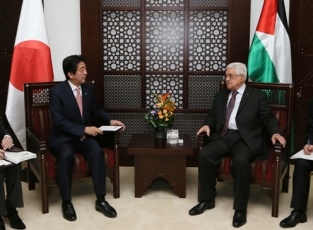 Prior to the meeting, Prime Minister Abe visited the Arafat Shrine in Ramallah, the West Bank of Jordan River, and paid a floral tribute in front of the tomb of the late Yasser Arafat, Chairman of the Palestine Liberation Organization (PLO), and wished him to rest in peace.

Concerning a video clip uploaded online that warned the execution of two Japanese nationals by ISIL, which occurred immediately prior to the meeting, Prime Minister Abe stated that such an act of blackmailing through holding the innocent lives as hostage is utterly impermissible, and Japan feels strong indignation, and requested support from the Palestinian side, including collection of information to secure their lives.

In response, President Abbas stated that an act of terror cannot be tolerated at any cost and that Palestine would oppose against any form of terrorism. President Abbas also wished an early solution of the abduction of Japanese nationals and an early release of the hostages, and expressed his solidarity with the Japanese people.

Prime Minister Abe extended his condolences to many innocent Palestinians who became victims in the Gaza Conflict last summer, and stated that he was concerned about many citizens who still suffer a deteriorated humanitarian condition.

Regarding Japan’s assistance to Palestine, Prime Minister Abe stated that the Government of Japan was prepared to provide approximately 100 million U.S. dollars of new assistance for humanitarian/reconstruction support of Gaza, financial support of the Palestinian Authority, and support in the fields of employment and healthcare. Moreover, stating that it would be necessary to start operation of the Jericho Agricultural Industrial Park (JAIP), a flagship project of the “Corridor for Peace and Prosperity” that Japan advocates, at an early date, Prime Minister Abe requested cooperation for this purpose from the Palestinian side. In addition, Prime Minister Abe stated that he would crystalize the “Corridor for Tourism” concept for the promotion of tourism in the region, and continue assistance for the development of Palestine in a cooperative manner with East Asian countries through the Conference on Cooperation among East Asian Countries for Palestinian Development (CEAPAD).

President Abbas expressed his deep gratitude for the assistance from Japan and also stated that he would make efforts for further development of Japan-Palestine relationship.

Regarding the Middle East peace, Prime Minister Abe expressed his support for a two-state solution which allows an independent Palestinian state and Israel to live side by side in peace and security, and also expressed his concerns over the stalemate of direct negotiations. Then, Prime Minister Abe requested both parties to refrain from taking actions that may escalate confrontation, and to take a flexible response toward resuming of the negotiation.

President Abbas reiterated that he would persistently commit to a two-state solution, gave an explanation on actions in an international arena including the United Nations Security Council resolutions to end the occupation and Palestine’s accession in international treaties and requested support from international society including Japan.