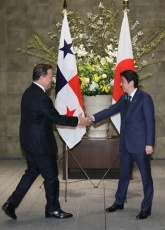 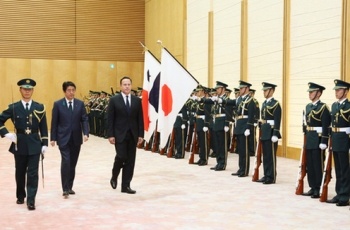 On April 20, Mr. Shinzo Abe, Prime Minister of Japan, held a summit meeting with H.E. Mr. Juan Carlos Varela Rodriguez, President of the Republic of Panama, who is visiting Japan on a working visit. The overview of the summit meeting is as follows. 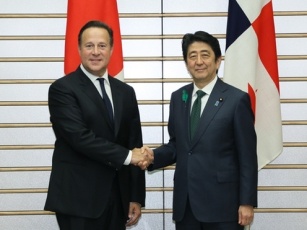 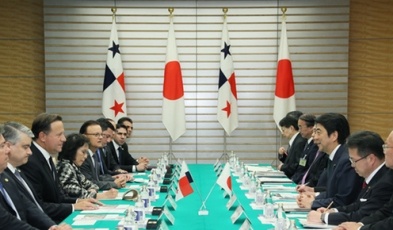 After the meeting, exchanges of notes for the ODA loan “Panama Metropolitan Area Urban Transportation Line-3 Development Project” were signed in the presence of the two leaders. Subsequently Prime Minister Abe and Mrs. Abe hosted a dinner reception in a relaxed atmosphere, and the two leaders spoke on a wide range of topics, including the Panama Canal, Panama coffee (Geisha coffee), and Japan-Panama academic exchanges.

Prime Minister Abe welcomed President Varela on his visit to Japan and explained that he hopes to further promote close bilateral relations, including in the maritime field. Prime Minister Abe also noted that the Government seeks to strengthen relations in various fields as a partner with which Panama can “develop, lead and inspire together.”
In response, President Varela expressed his gratitude for the Japanese side’s hospitality during his stay, along with stating that Panama values Japan as the first country in Asia to recognize Panama.

Prime Minister Abe explained that as a result of the “Juntos!! Japan-Latin America and the Caribbean Exchange Program,” implemented in line with the “inspire together” ideal in March this year, Japan invited around 100 individuals from the Central and South American region, including Panama, and intends to promote further people-to-people exchanges.
In response, President Varela expressed his appreciation for Japan’s initiatives, including the Invitation Program for Young Leaders.

Prime Minister Abe mentioned the importance of countries responding to the problem of international tax evasion within the framework of international cooperation, and affirmed Panama’s commitment to the international standards on exchanging financial account information, which were formulated by the Organization for Economic Co-operation and Development (OECD). The two leaders shared the view that Japan and Panama will promptly begin official discussions on a Tax Information Exchange Agreement including rules governing the automatic exchange of information consistent with the Common Reporting Standard.
Additionally, Prime Minister Abe explained that Japan intends to strengthen collaboration in the international arena, including United Nations Security Council (UNSC) reform. President Varela replied that Panama hopes to be Japan’s ally on a constant basis in the international arena, and that the Panamanian people are determined to continue to be Japan’s ally at all times.