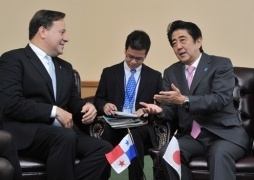 Photo: Cabinet Public Relations Office
On Wednesday, September 24, Prime Minister Shinzo Abe held a Summit Meeting with H.E. Mr. Juan Carlos Varela Rodriguez, President of the Republic of Panama, in New York, where Prime Minister Abe is attending the United Nations General Assembly. The overview of the meeting is as follows.
1. Prime Minister Abe congratulated President Varela on his appointment as President. Both leaders noted that this year marks the 110th anniversary of the establishment of diplomatic relations between Japan and Panama, and shared their intention to promote exchanges between the two countries during the Japan-SICA Friendship Year 2015.
2. President Varela extended gratitude for the economic assistance provided by Japan, and expressed expectation that more Japanese companies and financial institutions would participate in large-scale infrastructure projects planned in line with the expansion of the Panama Canal. In response, Prime Minister Abe noted that he will be pleased if Japanese technology and capital can contribute to the important infrastructure projects in Panama.
3. Both leaders shared the view that they will continue to strengthen the relationship of bilateral cooperation in such fields as economic development and maritime affairs.