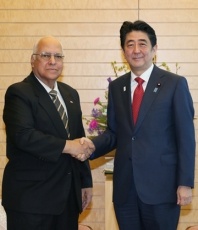 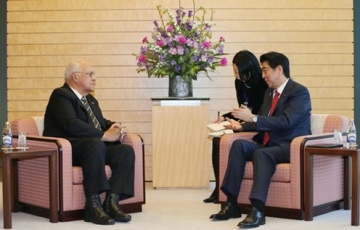 On March 12, Prime Minister Shinzo Abe received a courtesy call from H.E. Mr. Ricardo Cabrisas Ruiz, Vice-President of the Council of Ministers of the Republic of Cuba, during his visit to Japan. The overview is as follow.

1. Prime Minister Abe stated that amid the strengthening amicable relationship arising from the 400th anniversary of exchanges between Japan and Cuba last year, he welcomes this visit to Japan by Vice-President Cabrisas, who has served as Ambassador to Japan and Chairman of the Japan-Cuba Parliamentary Friendship League. Vice-President Cabrisas noted that he has been contributing to the relationship between the two countries even after serving as Ambassador to Japan and that he would like to encourage Japanese investment in Cuba.

2. Vice-President Cabrisas also stated that he would like to engage in strengthening economic relations, socioeconomic development cooperation and political relations between the two countries, and hopes Japan’s Minister for Foreign Affairs will visit Cuba. The Vice-President explained that U.S.-Cuba relations are attracting a lot of attention and he is optimistic about the progress of the dialogue. Prime Minister Abe welcomed the commencement of dialogue between the U.S. and Cuba, and stated that Japan would consider general grant aid in light of factors such as changes in the international situation surrounding Cuba and progress with the bilateral relationship. Prime Minister Abe stated that he would like to strengthen the relationship in wide-ranging areas, including through mutual visits of Foreign Ministers and other cabinet members as well as people-to-people exchanges between Japan and Cuba.