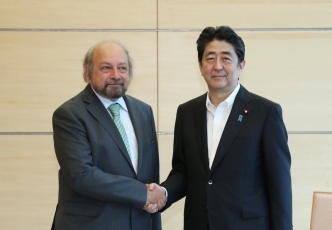 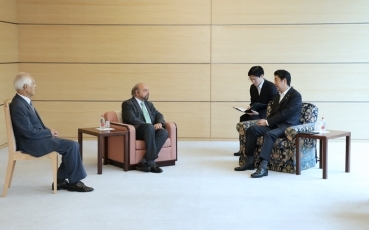 On July 28th, commencing at 11:30 am, for approximately 15 minutes, Prime Minister Shinzo Abe received a courtesy visit from H.E. Judge Ronny ABRAHAM, President of the International Court of Justice (ICJ). The overview of the visit is as follows:

1. At the outset, Prime Minister Abe welcomed the visit to Japan of President Abraham, as well as expressed his appreciation towards the efforts made by those who work for the ICJ to enhance the rule of law.

2. In response, President Abraham replied by stating that the ICJ and Japan has held a strong relationship for a long time, and that throughout history, Japan has thrown up prominent judges including Judge Owada. President Abraham also stated that peaceful settlement of disputes is becoming important for today’s international community. In addition, President Abraham expressed his deep respect and gratitude towards Prime Minister Abe’s strong commitment to the rule of law.

3. Furthermore, Prime Minister Abe stated that there is a growing expectation from the international community towards international courts as a means for peaceful settlement of disputes, and that it is important for the ICJ to continue to render impartial and fair judgments in order to maintain its crucial role.

Page Top
Back to International Law and Treaties