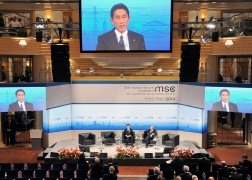 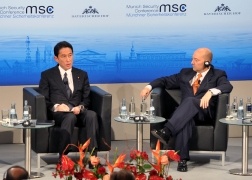 (3) Taking advantage of the opportunities presented by this conference, Minister Kishida held a Japan-Russia Foreign Ministers’ Meeting and Japan-Germany Foreign Ministers’ Meeting, and had informal discussions with many senior officials including Laurent Fabius, Minister of Foreign and European Affairs of France; Børge Brende, Minister of Foreign Affairs of Norway; Henry A. Kissinger, former Secretary of State of the United States; and Yukiya Amano, Director General of the International Atomic Energy Agency (IAEA).

(4) Minister Kishida contributed an article to “The Security Times,” a journal published on the occasion of the conference by its secretariat. In the article, he emphasized that “Japan is ready to work even more closely with its European partners.”

(1) Minister Kishida participated in the session “Global Power and Regional Stability” held in the morning of February 1. After hearing the panel discussion on “Europe, America, and Asia” (with panelists Ivo Josipović, President of Croatia; Lindsey Graham, United States Senator; Fu Ying, Chairwoman of the Foreign Affairs Committee of the National People’s Congress of China; and Shivshankar Menon, National Security Advisor of India), he made a 15-minute comment summarizing the session.

(2) Minister Kishida, in his comment, presented an overview of the world’s security over the next half-century, introduced the efforts made by Japan (in Africa, the Middle East, ASEAN, UN Peacekeeping Operations, nuclear disarmament and non-proliferation, strengthening the rule of law, etc.) as part of its vision for “Proactive Contribution to Peace” based on the principle of international cooperation, and expressed the determination of Japan to even more actively contribute to peace and security in the region and the world.

(3) During the panel discussion, China’s participant claimed that the Japanese leaders deny history. In response, Minister Kishida stated that Japan faces its history squarely and has clearly expressed remorse for the war and its colonial rule; that since the end of World War II, Japan has supported freedom, democracy, human rights, and the rule of law in East Asia and as a champion of these values, has consistently contributed to the peace and prosperity of the region and the world; and that Japan will continue to pursue the path of a peace-loving country.

Minister Kishida’s participation in the conference provided a good opportunity to disseminate Japan’s security policy to the world, particularly in gaining the full understanding of the participants regarding Japan’s consistent path as a peace-loving country since the end of World War II and Japan’s security policy as an extension of the peaceful course that Japan has taken.