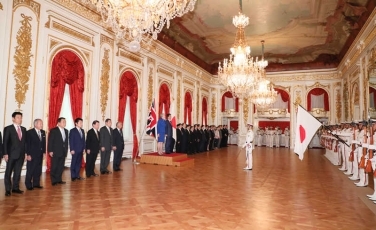 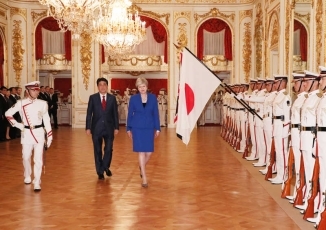 On August 31, commencing at 5:25 p.m. for approximately 60 minutes, Mr. Shinzo Abe, Prime Minister of Japan, held a Japan-U.K. Summit Meeting with the Rt Hon Theresa May MP, Prime Minister of the United Kingdom, who was paying an official visit to Japan. The overview of the meeting is as follows:

In addition, on the occasion of this Summit Meeting the two leaders issued the “Japan-U.K. Joint Vision Statement (English (PDF) 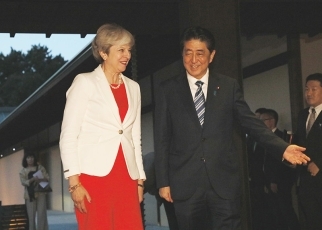 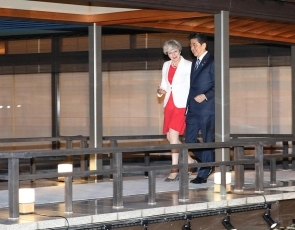 (Photo: Cabinet Public Relations Office)
The two leaders referred to the meaningful discussion on regional affairs which they held in Kyoto on the previous day, August 30, and confirmed that they would continue to promote concrete cooperation in such areas as joint exercises, defense equipment and technology cooperation, assistance for capacity-building of developing countries, counterterrorism and cyber, including cooperation to ensure a free and open Indo-Pacific, in order to strongly promote Japan-U.K. security cooperation to a higher level as was confirmed at the special meeting of the National Security Council (meeting of four ministers) held on the same day.

The two leaders shared the view that it would be important for each country to draw on its respective strengths, and to pursue measures in which both countries mutually complement and generate synergies. They shared the view that Japan and the U.K. would coordinate closely.

Prime Minister Abe stated that Japan hoped to learn from the rich experience of the U.K. in order to ensure Japan’s cybersecurity measures are thorough in the run up to the holding of the Tokyo Olympic and Paralympic Games in three years. The two leaders shared the view that they would work closely together to realize a free, open and safe cyberspace.

Prime Minister Abe explained that he was watching closely the UK’s negotiation to leave the EU, and stated that Japan supports a strong Europe. Prime Minister Abe further stated that Japan would like to strengthen cooperation with a united Europe, including the U.K., for the peace and stability of the international community after the exit of the U.K. from the EU. Prime Minister Abe also requested that consideration for ensuring transparency and predictability as well as establishing a transition period in order to minimize the impact of the exit on companies. Prime Minister May responded that the U.K. would achieve a smooth and orderly transition while listening to the opinions of Japanese companies.

The two leaders shared the view that they would work closely together to strengthen the Japan-U.K. economic relations after the exit of the U.K. from the EU, under the strong engagement at the political level.

Prime Minister Abe explained that recovery from the Great East Japan Earthquake was a top priority, and requested cooperation with lifting import restrictions on foods from Fukushima Prefecture where they have been scientifically verified as safe. Prime Minister May replied that she would make efforts to it.

The two leaders shared the view that Japan and the U.K. would coordinate to lead international initiatives to share knowledge with the international community in response to global challenges such as declining birthrates, health, promoting women’s empowerment, developing quality infrastructure and achieving the Sustainable Development Goals.