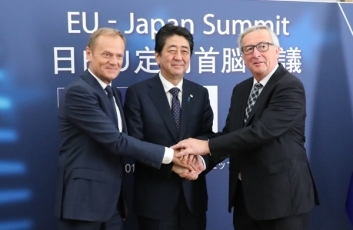 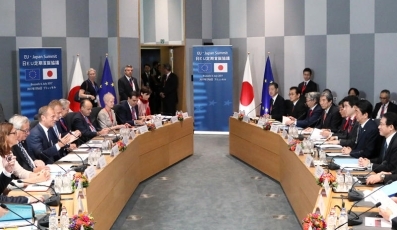 On Thursday, July 6, commencing at 11 a.m. local time (6:00 p.m. on the same day, Japan time) for approximately 60 minutes, Mr. Shinzo Abe, Prime Minister of Japan, H. E. Mr. Donald Tusk, President of the European Council, and H. E. Mr. Jean-Claude Juncker, President of the European Commission, met in Brussels, the Kingdom of Belgium for the 24th Japan-European Union (EU) Summit. After the Summit, the leaders held a joint press conference followed by the leaders’ working lunch from 12:50 p.m. for approximately 70 minutes. The overview of the Summit is as follows. Also, the leaders released the documents listed in 5. below as outcomes of the Summit.

(1) The leaders met for the third time this year, following meetings in March and May. They confirmed that agreements in principle on the Japan-EU EPA and the SPA had been reached.

(2) Prime Minister Abe stated that the agreement in principle on the Japan-EU EPA was realized by the strong political will based on the relationship of trust among the leaders, and that amid widening protectionist moves, the agreement in principle on the Japan-EU EPA demonstrates the powerful political will of Japan and the EU to continue to keep the flag of free trade waving high, and sends a strong message to the world. Prime Minister Abe also expressed that the EPA is a comprehensive, high-level and balanced agreement that will further contribute to encouraging international trade and investment, will be of great benefit for Japanese and EU citizens, and will serve as a model for economic order of the 21st century on the basis of free and fair rules. With such recognition, Prime Minister Abe conveyed his intention to build a more robust Japan-Europe economic relationship for the new era upon the agreement.
In response, President Tusk and President Juncker also expressed the view that the foundation for pursuing deeper and broader cooperation has been formed by the agreement. They also evaluated that the agreement will not only benefit companies and citizens of both sides, but will also intensify the relationship between the citizens of both sides, as indicated by the fact that the agreement in principle was reached not as a Free Trade Agreement (FTA) but as an EPA, reflecting a broader partnership. Furthermore, the leaders thanked the negotiators on both sides for their efforts and praised the outcome.
With regard to the agreement in principle on the Japan-EU SPA, both sides confirmed that the SPA will further strengthen the strategic relationship and collaboration between Japan and the EU which share fundamental values, amid the various challenges the international community is facing.

(3) With regard to the process of the United Kingdom’s withdrawal from the EU and the future EU-U.K. relations, Prime Minister Abe requested continued consideration for not only transparency but also for predictability since they will have impacts on various areas including peace and stability of the international community, global economy and business activities. The EU side stated its intention to continue information exchange with close partners like Japan to maintain transparency.

(4) Prime Minister Abe requested that the EU's restrictions on imports of food from Japan, including those from Fukushima Prefecture, be lifted further. The EU side replied that it recognized the importance of the issue for Japan, and would keep checking the situation regularly to consider further lifting of the restrictions.

Both leaders held a broad-ranging discussion on challenges facing the international community including security, counterterrorism, public order, global economy, climate change and migrants and refugees, and confirmed they will cooperate and collaborate closely towards the G20 Hamburg Summit. With regard to development, they shared the view that an expert-level discussion process will be established in order to pursue concrete cooperation including creating global standards for quality infrastructure development. They also shared the view that they will deepen collaboration in the fields of energy and science/ technology.

The leaders held a candid exchange of views on regional affairs including the situations in Asia and Europe. With regard to North Korea in particular, they condemned the ballistic missile launch carried out on July 4, along with sharing the view that they are ready to strengthen measures aimed at further restricting the transfer of relevant items and funding in order to urge North Korea to abandon all its nuclear and missile programmes, and that early adoption of a new United Nations Security Council resolution is important. Furthermore, Prime Minister Abe sought understanding and cooperation for promptly resolving the abductions issue, and obtained the EU’s understanding.

At the end of the meeting, both leaders celebrated that the Japan-EU relationship has never been closer before thanks to the agreements in principle on the EPA and the SPA, and shared the view that they will further collaborate to give more positive impacts to the world profiting from such relationship.